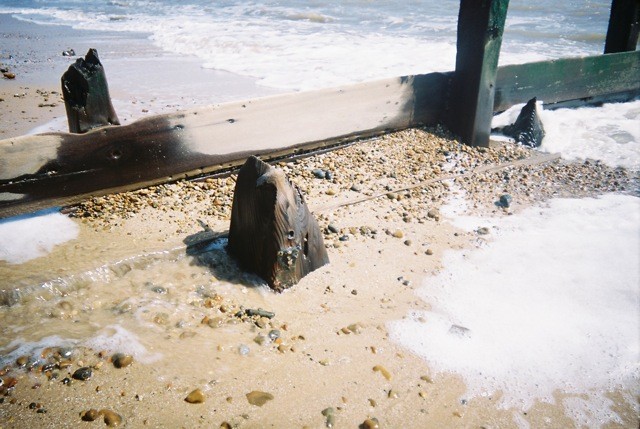 The Otolith Collective and The Showroom present On Vanishing Land, a new work by British sound artists and theorists Mark Fisher and Justin Barton.

On Vanishing Land (2013, 45m) is a magisterial audio-essay that evokes a walk undertaken by the artists along the Suffolk coastline in 2005, from Felixstowe container port to the Anglo-Saxon burial ground at Sutton Hoo.

Fisher and Barton have conjured a new form of sonic fiction from the dreamings, gleamings and prefigurations that pervade the Suffolk coast. The work includes commissions from digital musicians, interviews and the reflections of the artists. Inspired by the cumulative force of the Eerie that animates this landscape, On Vanishing Land pursues affinities between the modernist reinvention of the ghost story in M.R. James’ Oh, Whistle, And I’ll Come To You, My Lad (1904) and the atmospheric engineering of Brian Eno’s album On Land (1982). “Themes of incursion – by unnameable forces, geological sentience or temporal anomaly – recur throughout.” (Kodwo Eshun, The Otolith Collective, Curator, On Vanishing Land)

On Vanishing Land integrates new compositions by digital musicians Baron Mordant, Dolly Dolly, Ekoplekz, Farmers of Vega, Gazelle Twin, John Foxx, Pete Wiseman, Raime and Skjolbrot. For the installation at The Showroom it will be accompanied by an untitled sequence of a wide range of visual references, produced in collaboration with artist Andy Sharp (English Heretic).

Events accompanying the exhibition include a performance on 7 March by John Foxx and Raime of compositions relating to the Eerie. On 16 March, Fisher and Barton, with The Otolith Collective, John Foxx, Frances Morgan (Deputy Editor, The Wire) and Elizabeth Walling (Gazelle Twin), will explore the contemporary cultural fascination with the illogics of the Eerie. Finally, a conversation at the Boathouse café on the River Deben, Suffolk between the artists and Andy Sharp (English Heretic) will discuss the reimagining of MR James’ ghost stories by television directors Jonathan Miller and Lawrence Gordon Clark since the late 1960s.

On Vanishing Land was jointly commissioned and produced by The Showroom and The Otolith Collective. Supported using public funding by the National Lottery through Arts Council England. We gratefully acknowledge funding from PRS for Music Foundation and The Showroom Supporters. Event support from Markson Pianos and Bawdsey Radar.

Mark Fisher (b.1968) has worked with sound since the mid 1990s as a founding member of the Cybernetic Culture Research Unit at Warwick University. He is the author of the influential Capitalist Realism (Zer0, 2009) and the forthcoming Ghosts of my Life: Writings on Depression, Hauntology and Lost Futures (Zer0, 2013). Since 2004, he has written the celebrated blog k-punk and is a regular contributor to publications including The Wire and Film Quarterly. He lectures in Aural and Visual Cultures at Goldsmiths and is a Commissioning Editor for Zer0 books.

Justin Barton (b.1962) is a writer, philosopher and sound artist who recently completed his first novel The Corridor.

Andy Sharp (b.1968) runs English Heretic, an organisation dedicated to the commemoration of tragic figures and the exploration of occult landscapes. Since 2003, English Heretic has released numerous records including Plan for the Kidnap of Princess Anne (2011) and two volumes of Wyrd Tales: A New English Heretic Library Reader in 2007 and 2011.

Dolly Dolly (b.1970) is an artist, musician and apiarist who lives and works in Berkshire. His debut album Antimacassar is out this year on Exotic Pylon Records.

Farmers of Vega (b.1975) is the production name of musician Aled Rees whose music explores the intersection between drone, rhythm and the Eerie. Rees previously contributed music to londonunderlondon (2005).

John Foxx (b.1947) Vocalist, songwriter, musician and writer John Foxx founded and designed Ultravox!, one of the most influential groups of the post-punk era. His first solo album, Metamatic (1980), is a landmark in British electronic music. His collaborations with musician Harold Budd on the albums Translucence and Drift Music (2003) were integral to the affective tone of londonunderlondon. Since 2011, Foxx has collaborated with musician Benge Edwards as John Foxx and The Maths. Evidence, their most recent album, was released in 2012.

Gazelle Twin (b.1981) is the production name of artist, musician and composer Elizabeth Walling. Her first album, The Entire City (Anti-Ghost Moon Ray), was released in 2011. Gazelle Twin’s most recent release is the EP Mammal (Sugarcane Recordings (2013)).

Baron Mordant (b.1966) is founder of Mordant Music which functions as an artist name and as a record label. Mordant Music’s records include Dead Air (2006), SymptoMs (2009) and MisinforMation (2010), his acclaimed DVD of new soundtracks recorded for Central Office of Information films of the 1970s and 1980s released by the British Film Institute.

Ekoplekz (b.1969). The producer Nick Edwards, otherwise known as Ekoplekz, combines radiophonics, industrial noise and disintegrated dub with a commitment to primitive hardware and lo-fi cassette recording. Edwards has released records on the labels Punch Drunk, Mordant Music and Public Information. His most recent album was released under his own name on Editions Mego in 2012.

Raime are Joe Andrews (b.1981) and Tom Halstead (b.1980), one of the influential duos in contemporary electronic music. Their highly acclaimed debut album, Quarter Turns Over A Living Line, was released on the label Blackest Ever Black in 2012.

Skjolbrot (b.1981) Skjolbrot’s recordings meld documentary material with analogue and digital synthesis. His first release Maersk (2010) was informed by dub, the landscapes of industrial infrastructure and Walter Benjamin's Arcades Project. His new record is forthcoming in 2013.

Pete Wiseman (b.1975) is an improvising musician and visual artist. His album swim will be released in February on [RHP] CDRs.

The Otolith Collective represents the public platform of exhibitions, events, workshops and seminars that coexists in mutual relation to The Otolith Group. Founded in 2002 by Anjalika Sagar and Kodwo Eshun, The Group integrates film and video making with curating, programming, and writing. With a name derived from the anatomical structure located in the inner ear that is sensitive to gravity and motion, enabling the sense of balance, The Otolith Group’s artistic collaboration operates as a platform for an open dialogue on contemporary art practice and production. The Otolith Group was nominated for the Turner Prize in 2010. In addition to co-curating The Ghosts of Songs: A Retrospective of the Black Audio Film Collective 1982–1998 (FACT, Liverpool and Arnolfini, Bristol, 2007) and Harun Farocki: 21 Films (Tate Modern, London, 2009), The Group has been featured in solo presentations in Brussels (Argos Centre for Art and Media, 2007), London (The Showroom and Gasworks, 2009), Barcelona (MACBA, 2011), Paris (Bétonsalon, 2011), Rome (MAXXI, 2011–12), and Mumbai (Project 88, 2012). The Otolith Group has participated in numerous group exhibitions including New British Art (Tate Triennial, London, 2006), Ecotopia (2nd ICP Triennial, New York, 2006), Translocalmotion (7th Shanghai Biennial, 2008), Manifesta 8 (Murcia, Spain, 2010–11), There is always a cup of sea to sail in (29th Biennial de Sao Paulo, 2010), In the Days of the Comet (British Art Show 7, Hayward Gallery, London, 2010), and dOCUMENTA 13 (2012). Kodwo Eshun lectures in Aural and Visual Cultures at Goldsmiths. He is the author of Rock My Religion (The MIT Press/Afterall, 2012). The Otolith Group is based in London. The Otolith Group
www.theshowroom.org