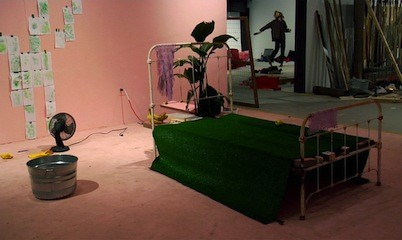 The Artist Talks is an exhibition of new work by Dublin-based artist Sarah Pierce, co-commissioned by Book Works and The Showroom. It is the final part of a year-long project undertaken by the artist as part of Book Works’ tour of new commissions and archival presentations, Again, A Time Machine.

Pierce repositions the convention of the artist’s talk as an open system with the potential to disturb or re-invent past artworks and received ideas. Using new video work, photographs, sculpture and performance, the exhibition contains a range of material and references that open up the relation between speech and archives. A stage is the setting for a choreographed ‘artist talk’, which has been developed as a group performance in collaboration with art students and uses fragments and gestures from past artworks. An arrangement of props, objects, video and photographs will frame the event with material that includes a film of students describing uncompleted artworks, and a set of small clay studies based on the unsigned sculptures that became known as ‘unknown Rodin’s’.

Drawing from these references, and the fleeting asides, verbal punctums and interruptions that often disturb the conviction of a ‘finished’ work or the flow of prepared speech, The Artist Talks is an assemblage of actions and objects that mediate artworks.

During the exhibition the work will be animated and revised through an evening of talks prepared by Dave Beech, Melissa Gronlund and Grant Watson, and a day of events including the performance The Artist Talks and readings hosted by The Happy Hypocrite. Readings from Dora García’s All the Stories will also be performed.

Sarah Pierce (1968, Connecticut) is based in Dublin. Since 2003, she has used the term The Metropolitan Complex to describe her project. Despite its institutional resonance, this title does not signify an organisation. Instead, it demonstrates Pierce's broad understanding of cultural work, articulated through various working methods, involving performances, interviews, archives, exhibitions and self-publishing.

Selected exhibitions in 2011 include: A Terrible Beauty is Born, 11th Biennale de Lyon; Push and Pull, Tate Modern, London and Mumok, Vienna; Research Program, Charlottenborg Kunsthal, Copenhagen; Appeal for Alternatives, Stiftung Kunstsammlung Nordhein-Westfalen K21+K20, Düsseldorf; and We are Grammar, Pratt, Manhattan. Her work will appear as part of the exhibition Anti-establishment in 2012 at the CCS Hessel Museum at Bard College, where she was resident artist in 2011; and at the NCAD Gallery in Dublin as part of a major commission between 2009-2012 by Sarah Glennie for the Irish Film Institute.

Sketches of Universal History Sarah Pierce’s first artist publication, edited by Rike Frank, will be co-published by Book Works and The Showroom in Autumn 2012.

The Artist Talks is co-commissioned by Book Works and the Showroom as part of Again, A Time Machine, and supported by Arts Council England, The Henry Moore Foundation, Culture Ireland, Center for Curatorial Studies, Bard College, Members of The Showroom’s Supporters Scheme and Outset as The Showroom’s Production Partner 2012
www.theshowroom.org