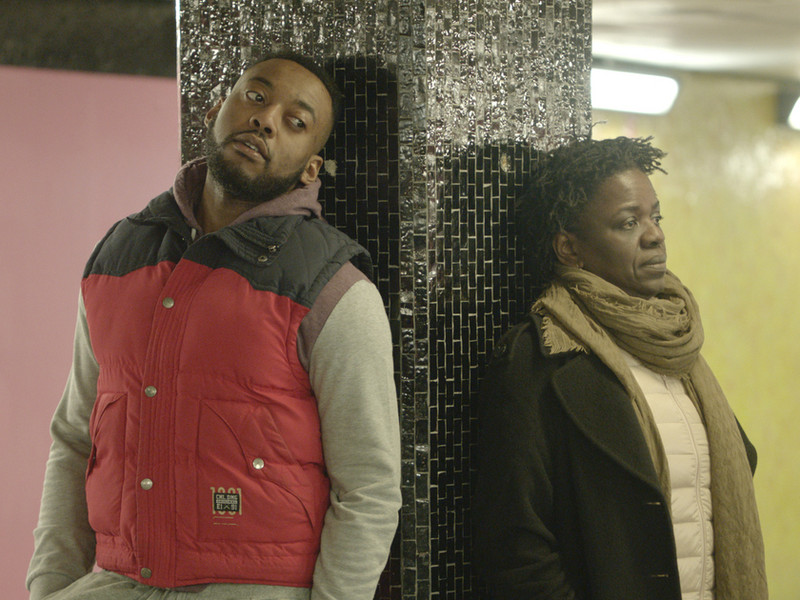 The Showroom presents a major new commission by Wendelien van Oldenborgh and her first solo exhibition in London.

From Left to Night is an experimental film production through which a number of seemingly unconnected players, places, events, subjects and histories, drawn from The Showroom's neighbourhood, meet.

It involves five people, three locations, and the different subjects and forms of knowledge that they bring with them. These range from urban tensions – such as unresolved histories of the 2011 London riots – to music and the personal ways in which each of the protagonists relate to ideas of the political.

Material gathered in a concentrated two-day shoot has been brought together in a film installation specially conceived for The Showroom.

The project developed out of the artist’s year-long engagement with The Showroom’s local area. In particular, a music video project initiated by van Oldenborgh and local hip hop artist Reveal, performed by Owls, became an important step towards cementing relationships with some of the players in this film.

Through carefully orchestrated scenarios van Oldenborgh creates situations where these elements collide and trigger new articulations and sparks of logic; generating the ‘script’ with the full involvement of the players, as filming unfolds.

As with the artist’s previous works, the film explores social dynamics and behaviours, the governing systems and architectures which provoke and reinforce these, and the voice and language of the individual amidst them. In so doing van Oldenborgh reveals a reality often hidden from view in the public realm, in an attempt to understand familiar stories in a new way.

A monograph will be co-published by The Showroom, Sternberg Press and If I Can't Dance in autumn 2015, funded by the Dr AH Heineken Prize Foundation.

This new commission forms part of How to work together, a shared programme of contemporary art commissioning and research devised by The Showroom, Studio Voltaire and Chisenhale Gallery.

How to work together is supported by a capacity building and match funding grant from Arts Council England through Catalyst Arts, with additional funding in the second year from Bloomberg, Jerwood Charitable Foundation and the How to work together Artist Commissions Production Fund.

This commission is also supported by the Mondriaan Fund and The Embassy of The Netherlands.

Denise Ferreira Da Silva writes about and researches violence and ethical issues of the global present, using tools from critical legal theory as well as feminist, racial and postcolonial theorising.

Dean Burke is known in the music scene as Owls and lives locally to The Showroom.

Mehrak Golestan researches hip hop pedagogy in his Masters studies at SOAS and is known as the hip hop artist Reveal. He lives locally to The Showroom.

Wanderley Moreira Dos Santos trains as a psychodynamic psychotherapist at Tavistock Centre and researches race relations in Brazil through cultural forms such as breakdance and hip hop.

Louise Shelley works with various collectives, generating communal knowledge through art practice. She works at The Showroom as the Collaborative Projects Curator.

Romeo K. Gambier is a hip hop DJ, known in the Dutch scene as Mixmaster Fader, he has appeared in various of van Oldenborgh's works since 2005.

Paddington Green Police Station is where UK terror suspects are detained and questioned.

Red Bus Recording Studio is a local recording studio whose fame dates back to the early 1980s when Duran Duran recorded ‘Girls on Film’ there.