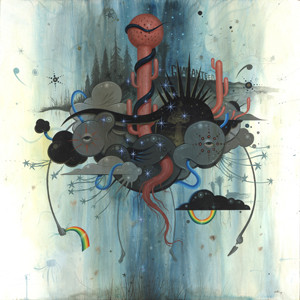 MAMA starts 2010 with an international group exhibition on the rainbow. In Don't Worry, Be Happy this universal symbol of hope, happiness and freedom acquires a dark edge.

Various groups of people claim the rainbow as a symbol of their ideals. Jehovah's plant a flag with a rainbow in their garden featuring the text "There is hope", Greenpeace roams the oceans on their Rainbow Warrior and South Africa calls itself the Rainbow Nation. However, a symbol is nurtured because things are not yet as they should be. The search for the pot of gold at the end of the rainbow continues......

Don't Worry, Be Happy includes the work of fourteen artists. American icons Jeff Soto and Richard Colman exhibit in the Netherlands for the first time. Many works are produced especially for this exhibition. On January 22nd the show opens with work by Wayne Horse, Merijn Hos, Ola Vasiljeva and Abner Preis amongst others.

Special event during the opening at 22:00 hours → The Lovedance by Abner Preis and friends!