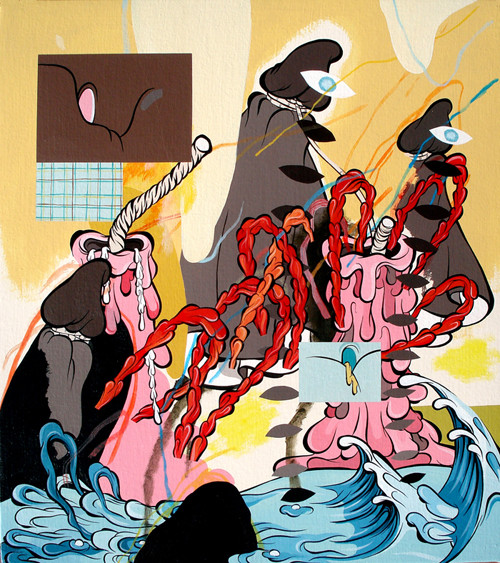 From 2nd April until 29th May Showroom MAMA presents the international group exhibition Sweatboxing. Featuring 10 contemporary artists whose work is thematically and stylistically varied, they are connected in their references to movies, cartoons and animation. Sweatboxing also premieres two special projects by Gerben Meinders and Mariusz Tarkawian. A book about the exhibition shall be published. it features interviews with the participating artists, in-depth articles and shall be a published record of the exhibition in flipbook form.

The title Sweatboxing comes from Walt Disney Studio's "sweatbox". Disney was the first animation studio to make extensive use of preparatory sketches for its animations and this is evident in the final results. The sweatbox was a small projection room where rough footage was screened for Disney's approval. The room was just big enough to sit the animators, studio bosses and Walt Disney himself.

Animation is associated with movement; yet paradoxically it is made up of twenty-four consecutive still images per second. Contrasting the staccato, repetitive sequences of the 24 frames per second of actual animation, the exhibition itself is an animation of selected still pictures. The movement takes place when walking through the exhibition.

The Canadian animation pioneer Norman McLaren (1914-1987) once remarked, "Animation is not the art of drawings that move, but the art of movements that are drawn. What happens between each frame is much more important than what exists on each frame. Animation is therefore the art of manipulating the invisible interstices that lie between the frames."

The gallery space is divided into sightlines broken by separating walls standing on three imaginary lines drawn through the gallery. This gives the artists their own exhibition space and their work can be easily viewed separately. Together, the exhibition's different spaces form a whole that can be viewed as different and incoherent scenes of an animated story.

Walt Disney is indispensable to popular culture. Youth cultures continuously revive Disney's images on their T-shirts. Similarly, contemporary art has often recycled images from popular culture and Disney makes a sizable contribution to this tradition. One of the first examples of genuine appreciation for his work came from the Russian film director Sergei Eisenstein. From 1940 to 1948 he worked on a book he never manage to publish about this maestro of editing, about whom he said "The work of this master is the American people's greatest contribution to art.

On 1st May, halfway through the exhibition, Showroom MAMA shall premiere two special projects.

Gerben Meinders (NL, 1982), Young Grunn Artist 2010, shall present an installation where you can see the results of his obsessive way of working. He draws different characters in ink on wrapping paper used for flowers. Each drawing is photographed for an animation portraying an almost static image.

Marisz Tarkawian (PL, 1983) graduated in 2009 from the Maria Curie Sklodowska Academy in Lublin. He caused a sensation with his graduation show where his version of art history was drawn and systematically archived in a series of 20,000 images. In 2009 he won the Goslar Museum's Kaiserring Stipendium and made the step to copying video art. The first film he copied was Negroisation by Tomek Kozak. For Sweatboxing Tarkawian shall copy, as a comic strip, a film by Katarina Zdjelar.
www.thisismama.nl