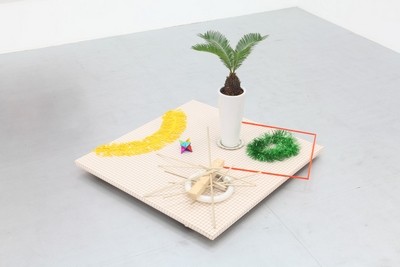 IKEZAKI Takuya was born in 1981 and graduated in 2005 from the oil painting department of Musashino Art University. In 2010 he completed an advanced course in experimental art at the Central Academy of Fine Arts in Beijing, China. IKEZAKI conceives of three-dimensional spaces as though they were canvases, and the colors and shapes of everyday objects as though they were paints. His artworks consist of everyday objects that have had their meanings redefined, three-dimensional works, film works and photographs. Placed in a space after careful calculation, they seem to entail a depth of Eastern thought that could only be achieved after spending three years in China.

Tomohito ISHII was born in 1981 and graduated in 2006 with a master’s degree in oil painting from Musashino Art University. He is the 2012 recipient of the Musashino Art University Paris Award and will stay in Paris for one year from April. ISHII makes cross-interpretations of identical motifs based primarily on photographs, and by layering symbols and information, he explores issues associated with visual perception. In his “sub-image” series, which will be presented in this exhibition, he incorporates the two opposing visual elements of signal and image into a single painting.

Shinichiro KANO was born in 1982 and he graduated with a degree in western-style painting from the Nagoya Zokei University of Art and Design in 2007. In 2009 he took a course given by Daniel Roth at the Staatliche Akademie Der Bildenden Künste Karlsruhe. By repeated combination of motifs that he considers “parts,” KANO deliberately interchanges the meaning of those things. The deconstructed motifs are made to appear odd but at the same time presented as new concepts, and when you look at them, what initially appeared taciturn works have a lot to say once you notice the hints for unlocking their secrets.

Aki KONDO was born in 1987 and is currently studying at Tohoku University of Art & Design Graduate School’s Department of Visual Arts. In this exhibition, she will show six works that she has made since this past summer. KONDO, who uses dynamic compositions and strongly vivid colors, captures time and detailed stories using speedy and firm brushstrokes in her paintings. The works tempt the viewers and draw out their imaginations.

This exhibition brings together the work of four young artists in their 20s and 30s who are pursuing new possibilities for painterly expression in the context of the present-day information society. Their works stimulate our perception and stretch the boundaries of our sensibilities.
www.shugoarts.com