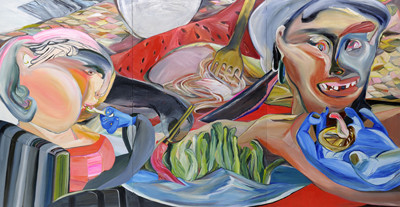 The world is made up of many beautiful colors and many not so beautiful colors. That is why the human heart can be captured by even just a little truth. I always see narratives in paintings. I guess it might be similar to how film directors combine lots of cuts to make a single work. The product is a fiction, but it always contains truth.
Aki Kondo

ShugoArts is pleased to present “An Earth of Eating,” a solo exhibition for Aki Kondo. Kondo uses dynamic compositions, strong, vivid colors and a determined, confident brush in committing to her canvases images that encapsulate deep and complex stories. Creating multiple panels in continuous series is a key characteristic of her art, and, like single scenes from a film, her brightly colored works inspire the imagination of the viewer. At the exhibition “Phantoms of Asia,” which is currently being held at the Asian Art Museum in San Francisco and was curated by Mori Art Museum Chief Curator Mami Kataoka, Kondo is exhibiting a massive, 10-meter-long painting titled The God of the Mountain.

“Sakura no Sato is a depiction of a world that is so beautiful you don’t know if it is real or not, like an illusion that you have arrived at a completely different world. It is a vision I saw of a cherry blossom utopia. There, the cherry blossom god comes and gives life to all creatures. An Earth of Eating is a work about how living things live by eating other living things. Everything that is living on this planet gains a kind of energy to live by eating. But I wonder what it will look like after hundreds or thousands or tens of thousands of years, when the Earth is destroyed and another planet is born. Even if everything changes, I think the act of eating will remain. I think this is significant.” So says Kondo on the occasion of this exhibition.

This exhibition includes two major paintings, Sakura no Sato (227.3x909cm) and An Earth of Eating (227.3×436.5cm) as well as several other vigorous new works. We hope you will come and allow your entire bodies to be immersed in the vitality of this young artist’s work.