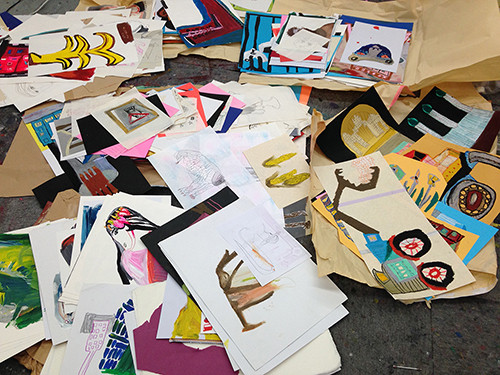 For me, my drawings are memories of daily emotional shifts.
They are things I create so I can understand my own feelings.

The subject could be anything – as long as it can be drawn. What’s important is that I get it down before the emotion disappears.
I find that, as records of the heart, drawings convey more than words.

I started drawing when I was making my graduation work at university.
I didn’t have anything in particular I wanted to draw.
But, gradually I began drawing everything – the flavors of the foods I ate, the sounds I heard, the smells I smelt, the abstract experiences I had. I drew like crazy.
The moment I got something on paper then suddenly it would take on concreteness – as a thing in my memory, a thing I had seen.
Back at this time my state of mind was calm, and the colors I used tended to be soft and warm, like a baby.
It was a lot of fun.

Then on March 11, 2011 the earth let out a cry – the Great East Japan Earthquake – that made my heart stop.
Suddenly I could no longer recall all those memories I had accumulated.
The darkening night sky was so scary I closed my curtains, put on my skiwear and hid in my futon.

The next day, at a convenience store with empty shelves, I saw a newspaper with a photo of a bright red fire floating on a black sea. I looked at that red color until it disappeared behind my tears. So strong it was, even on an ashen gray background, that for a while I became scared of looking at colors.
Such a terrible thing was happening just beyond the mountains in a nearby town. And yet, I couldn’t get there. It felt like a crime that until just yesterday I had been painting, that today I was alive.

The drawings I made immediately after the earthquake were all jumbled and colorless. I couldn’t even grip my pencil or brush properly, so all they really record is my own trembling.
It was still cold in Tohoku, and although the electricity and water had stopped, the sunlight that shone in through my window was warmer and softer than I’d ever known.

Soon I couldn’t stand it anymore.
For a little while after the disaster I was in Yamagata, and then I went to my parents’ house in Sapporo. The town that my plane descended into was just the same as always. I couldn’t bare the gap between it and what had happened in Tohoku. I still couldn’t see colors and it got worse.
The reason I was using a brush and not a hard pencil at this time was because I was scared of feeling even the vibrations through my pencil as it came into contact with the paper. My mind was constantly trembling.

After about a month I returned to Yamagata and joined a bus to go and volunteer.
As the bus moved into the area where the tsunami had hit the scenery changed abruptly – everything was washed away, and there were piles of debris and cars and broken houses. What awaited me at this transformed town were despair and sadness, and the strong power of people helping each other survive.
The drawings I made after that were of trucks and other vehicles transporting supplies. Many were of houses I made for people whose houses had been lost.

Now three years have passed since then. My own trauma has still not abated, so it must be so much worse for people who actually experienced the tsunami. Yet, no matter how terrible the things we witnessed, our memories of that day will gradually become altered so that the worst disappears. And, of course, whatever feelings we do feel, we’ll feel because we’re still alive.

Tremors in the heart are abstract things that, once they’ve gone, will never come back. As you draw them, your imagination is already trying to erase the painful parts. That is why it is so difficult to get any closer to one’s heart – why the depictions are always imperfect.

I feel the memories I have created on paper require no explanation.
Accumulated memories alone describe the present and alone make the future.

This exhibition is composed based on approximately 200 drawings, a slide presentation and 7 paintings drawn around the same time.