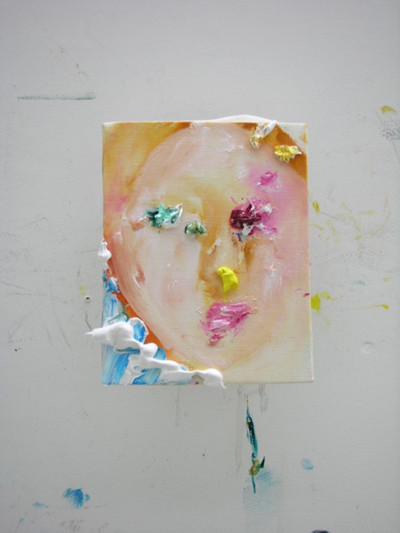 ShugoArts is pleased to present “LOVE more awful! And more beautiful because painting is all for love, Spring 2012.” At his most recent solo show at ShugoArts, in 2010, Kobayashi added a new dimension to his paintings, by explaining that each had an absent pair, to which it was deeply though inexplicably connected. In this exhibition, he takes the process forward a further step, so that each painting is connected not just to one other painting, but several.

Kobayashi says that “More awful paintings!” is “like an incantation for the purpose of making more beautiful paintings.” A person living on canvas, the weaving lady, the lady who loves green, the naked lady in yellow, the lady who has had paint thrown on her... Recording improvised acts, they are clad in many colors, and, as though they have stored up as much love as possible, they possess a rich and luxurious aspect. The relations between the paintings – their connections – are much freer, and at the same time the individual paintings are more brilliant than ever.

Kobayashi tries to get closer and closer to truly beautiful paintings by trying to make them all the more “awful.” And when we stand in front of them, we too will accept the love they emit, feel their beauty and attain a heightened sensibility as a result.

Masato Kobayashi was born in Tokyo in 1957. In 1984, he graduated with a Bachelor of Fine Arts (Painting) from Tokyo University of the Arts. In 1997, he moved to Ghent, Belgium, where he lived and worked for ten years until relocating to Fukuyama City, Hiroshima Prefecture in 2007. The artist has held major solo exhibitions at The Miyagi Museum of Art (2000), S.M.A.K. (Museum of Contemporary Art Gent), Ghent (2001, Belgium), Tensta Konsthall (2004, Sweden), Nariwa Museum (2009, Okayama). In 2010, he exhibited a series of pairs of paintings that were linked despite great distance – one of each pair was at the Mediations Biennale (at the National Museum in Poznań) in Poland and the other was at Hiroshima City Museum of Contemporary Art. This is his first solo show at ShugoArts in two years.
www.shugoarts.com