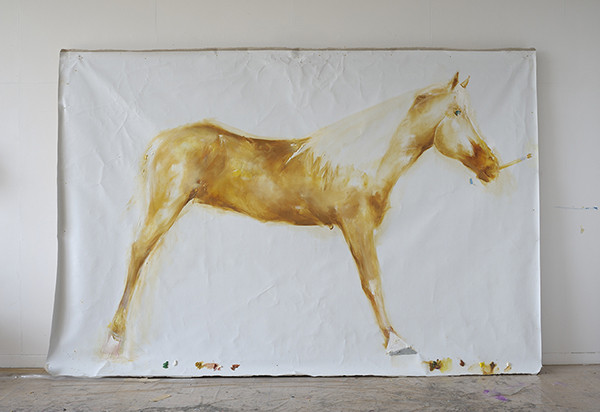 The caves of Lascaux, portrait of Napoleon Bonaparte, Picasso’s Guernica: What springs to mind when you think of horses depicted in artworks? This long-standing motif, which you’d think must have been painted in every way possible, is what Masato Kobayashi chooses to paint now. And yet the horse that emerges on his canvases is not a symbol of power, or a companion in life. It is “just” a horse, a nameless horse. This solitary horse, which is given life through its painting, just stands, looking ahead, with its lustrous coat and dignified eyes.

Several of the horse paintings seem to be self-portraits, and they are exhibited here with Kobayashi’s depictions of women and stars – all painted with “the paint of the planet,” inhabitants of his “planet of painting.” As with the works from “LOVE more awful! And more beautiful because painting is all for love!” Kobayashi continues to seek out more liberated forms of painting. Now it is up to us to decide how we respond to these paintings, which have been freed by the artist from the preconceived frameworks and notions of the medium.

Masato Kobayashi was born in Tokyo in 1957. In 1984, he graduated with a Bachelor of Fine Arts (Painting) from Tokyo University of the Arts. In 1997, he moved to Ghent, Belgium, where he lived and worked for ten years until relocating to Fukuyama City, Hiroshima Prefecture in 2007. The artist has held major solo exhibitions at The Miyagi Museum of Art (2000), S.M.A.K. (Museum of Contemporary Art Gent), Ghent (2001, Belgium), Tensta Konsthall (2004, Sweden), Nariwa Museum (2009, Okayama), SEZON MUSEUM OF MODERN ART, (2012, Nagano). In 2010, he exhibited a series of pairs of paintings that were linked despite great distance – one of each pair was at the Mediations Biennale (at the National Museum in Poznań) in Poland and the other was at Hiroshima City Museum of Contemporary Art. In the last two shows of the series of “LOVE more awful! And more beautiful because painting is all for love!”, he questioned at the beautiful paintings. This is his first solo show at ShugoArts in two years.
www.shugoarts.com