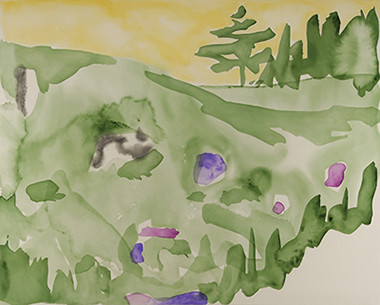 The paintings are not to express my own internal thoughts; they are born through an awareness of my connection with the other. I want them to be expansive, open.
The term “post-3.11′′ is used so often, I wonder how meaningful it is for me to repeat it here. But the fact is it can’t not be discussed. 3.11 was a significant shock. It was not just the earthquake, the tsunami and the nuclear power plant accident, it was like everything I had thought about society, everything I had understood, accepted, categorized in my own way about society was upturned and broken. Everything that I thought I had understood was actually just the world as it existed on the foundation of my own one-sided perspective. From there I started thinking that in order to look at the world it is necessary to look at it from the outside.
This also influenced my work. I started wondering what the world would look like if I distanced myself from the tools I used to think were for expressing my internal thoughts – brush, ink, canvas – and I distanced myself from the audience, and I instead tried to capture the world from the perspective of an “other” who lived outside, beyond the realm of my own imagination. What would it mean to work like that? And what kind of art would emerge as a result?
The artwork I make is always in a state of flux. At times, frustrated with that situation, I try to control it. But, in doing that, I end up being controlled myself. Should I distance myself from it? In that way, perhaps I could get a perspective on the world from the outside? On second thought, perhaps that perspective would really just be me in the studio dreaming. Sometimes I understand that depicting the world in paintings is impossible, and yet I have this arrogant streak, so I end up thinking I can.

Naofumi Maruyama creates his paintings using the technique of staining. He says that if up until now he saw his cotton canvas as a screen on which to project an image, now he sees it as a pool of water. If the wind blows, ripples form; on rainy days it is full with water, and if sunny days continue, it disappears. But if you have a medium that, unlike a screen, changes its form depending on its interaction with the outside world, then perhaps a painter could really create in reality the kind of painting he makes in his head.
Maruyama’s work in recent years has become increasingly abstract, with houses, for example, being reduced to a collection of simple icon-like stains, which make you wonder if they are houses or things that just resemble houses or things that perhaps resembled houses for a moment. Making a judgment is difficult. In addition, the paintings often seem to consist of a patchwork of elements from different ages, places and scenes – things from his memory or his everyday life, like scenes of his hometown, the random path flown by a butterfly, patterns from somebody’s favorite clothes, colors from dreams and so on.
We live surrounded by “otherness” – everything beyond our own skin. Medium, image, environment, you, me – all these elements in their state of flux are captured by the painter in his art, while they are looked at by others. The painter says that he can’t control others, and yet he makes paintings that connect him with them. Meanwhile, we can’t fully comprehend his actions, his perspective on the world, and yet we still go and look at his artworks. Perhaps it is this contradiction that the art shows us.

Naofumi Maruyama was born in Niigata Prefecture in 1964, and he currently lives and works in Tokyo. His major solo exhibitions include “Transparent Footprints” at ShugoArts (2010) and “Naofumi Maruyama: 1988-2008′′ at the Meguro Museum of Art (2009, Tokyo). Major group exhibitions include “New Phases in Contemporary Painting: A Curator’s Message” at Hyogo Prefectural Museum of Art (2012), “Tsubaki-kai 2010: Trans-Figurative” at Shiseido Gallery (2010, Tokyo), “Berlin-Tokyo/Tokyo-Berlin” at Neue National Galerie (2006, Berlin), “The Elegance of Silence” at Mori Art Museum (2005, Tokyo) and “Happiness: A Survival Guide for Art and Life” at Mori Art Museum (2003, Tokyo). This is his first solo show at ShugoArts in three years.
www.shugoarts.com