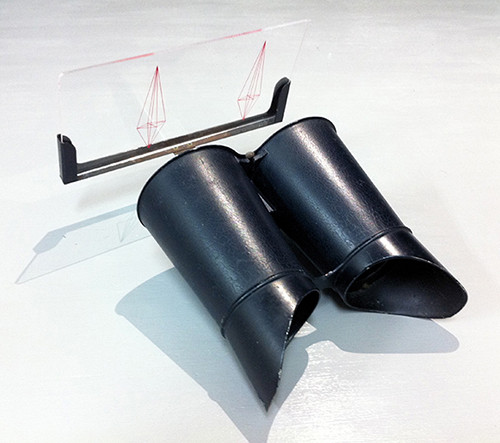 The verb “to retard” means in French and English to slow up or delay.
Marcel Duchamp made reference to it in his Large Glass. In his original notes on the work, published in Green Box, he describes the “retard en verre,” which in English is rendered “delay in glass.” Octavio Paz focused on the fact that the term could be used in music as well as in reference to delays in space or time. So what exactly is this “delay”?

In this exhibition, we exhibit ROOM 4×9, which consists of nine keyboards each with four keys pressed through a random operation; top13040, a photogram that captures the movement and locus of a spinning top; several Passage works, acrylic boards silk-screened on their reverse, which change their appearance depending on where viewers are standing; and HSMD, which involves a stereoscope.

“I always approach my work as though it were painting,” says Fujimoto. Taking the entire gallery space as the support medium, he skillfully places elements of sound and matter – each complete within itself and also as a group – thereby creating “delay” within the gallery space, experimenting with how impediments in sight or sound might appear to our senses. And now we, the viewers, can experience the “delay in painting” of this skilled manipulator of the five senses.

Fujimoto was born in 1950 in Nagoya. He represented Japan at the Venice Biennale in 2001 and was selected in the international exhibition of the same event in 2007. In Japan he attracted much attention for his “Audio Picnic at the Museum” exhibition, which he planned and organized himself for one day each year for ten years from 1997 till 2006. Through it he proposed to both viewers and museum curators a new form of artistic expression. In 2007 he held a solo exhibition at the Hiroshima City Museum of Contemporary Art and then held three simultaneous solo exhibitions at the Otani Memorial Art Museum, Nishinomiya, The National Museum of Art, Osaka, and The Museum of Modern Art, Wakayama. In 2008 he has participated in exhibitions “20th Anniversary Exhibition Collection + (Plus) Reverberating Sound-Colour-Form” (Takamatsu City Museum of Art, Takamatsu), “Takehisa Kosugi + Yukio Fujimoto ‘Music’” (Aomori Contemporary Art Centre, Aomori). In 2009 he had a solo show of “The Tower of Time” Ikon Gallery, Birmingham, in 2011 “n/t -phonography/ photography-” ShugoArts, and participated the “phono/graph – sound, letters, graphics” Ginza Graphic Gallery, Tokyo in 2014.
www.shugoarts.com