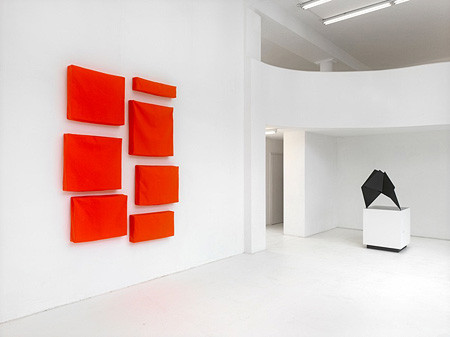 “Die gestundete Zeit” (Time deferred) is a famous poem by Ingeborg Bachmann (1926-1973). For her poetry collection of the same title, she received the Literature Prize of Gruppe 47 in 1953. 20 years later she tragically died in a fire at her apartment in Rome.
Bachmann’s poem carries a dark, existentialist touch. It is a testimony of alienation and loss in the face of total catastrophe, conveying a rough melancholy and firm, stubborn truthfulness. Dominated by severely reduced and symbolically charged parameters such as time and light, sea and horizon, the mood and motifs of the text resonate with visual artists of the younger generation today, as well as with some of their rediscovered precursors. A phenomenon that has less to do with nostalgia or pessimism, but rather with a sense for fundamental human tragic – which in many works is playfully thwarted at the same time.
Thus, Björn Dahlem’s delicate sculptures feature a bizarre-spiritual poetry, which is connected to astronomy and spirituality, expressing a quest for reason and belief in something higher. Katja Strunz’s metal foldings with their morbid allusions to classic modernism exhaust a sense of decay and fatigue. Vlatka Horvat with her filigree minimal objects permeated by contradictions alludes to Sisyphos, whom Albert Camus called a “happy man”. With Rosa Barba and Eli Cortinas, film is perceived as a medium in which language, light or colour act as conveyors of a romantic-conceptual narrative. Jamie Isenstein’s performative sculptures carry a playful penchant for surrealism. Franz Erhard Walther with his textile, usable wall formations leaves every imagination to the viewer. The melancholy in Marcel Dzama’s and Ronny Lischinski’s narrative imagery habitually shifts from delicate mystery towards the humorous, while Luigi Ghirri’s photographs are marked by meek, almost metaphysical irony. In contrast, Thomas Zipp’s and Gregor Schneider’s dark formulations launch towards the abyss, in an absurd, almost psychotic way – as one spoke of “people with no railing” in the 1950s.
Undoubtedly, the intellectual context in which the poem was developed – Zero, Informel, Second Modernity, Existentialism – has recently receiveded increased attention. Nuclear age, space era, postwar period and cold war: at point zero man was looking for pioneering utopias on the one hand, on the other for pre-modernism’s “true self” – which Martin Heidegger, on whom Bachman wrote her Ph.D. thesis, called “authenticity”. A similar desire is once again noticeable today – even though the notion of tragedy, with all its uplifting potential, is often viewed with suspicion or steeped pathetic. Where this is not the case, a poetically-reflected keynote ocassionally shows, as it can also be derived from Bachmann’s poem. In an associative way this exhibition assembles contemporary forms of of film, sculpture, collage, photography, installation and painting, representing said keynote in various ways.
www.sieshoeke.com