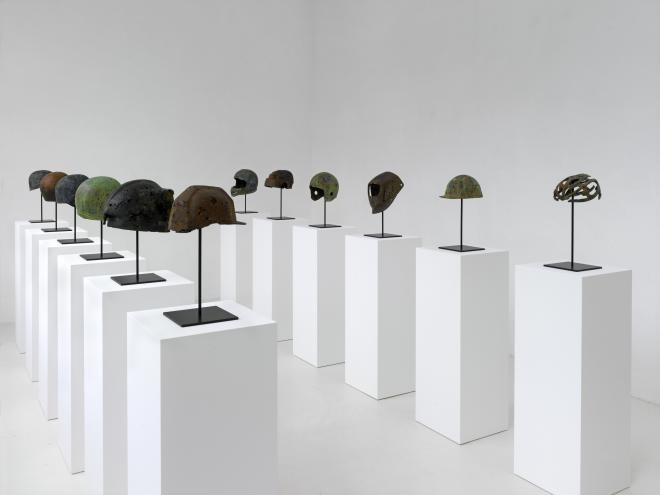 The programmatic title Somebody revolves around the individual exhibits like an all-encompassing theme, referring to the work as an associative charge.

Sies + Höke is pleased to present Kris Martin’s fifth solo exhibition at the gallery. The programmatic title Somebody revolves around the individual exhibits like an all-encompassing theme, referring to the work primarily as an associative charge – with the exception of one new group of work, where the title is linked directly to its medium.

In his work Kris Martin focuses on the subject of human existence, on what constitutes a personality, a being, a life story, a life, or what remains of it. Which track, which lasting impression, which personal imprint does man leave behind, is remembered of an era, a work, a period of time, and what remains of it for posterity, for the collective memory?

How is something perceived that is no more, but was? How would future viewers look at the 21st century, how do we imagine our future in the present or the future generations’ perception of our existence from their point of view? By means of minimal creative interventions, which are so typical for Kris Martin’s work, he shifts meanings, creates the new from the old, the valuable from the worthless, final works from objects in transition. He looks back at personal lives, at the universal as well as the private and confronts us with fragments, ultimately all circling around the one crucial question: Who or what am I?

A form of timelessness inherent in almost every work will accompany the exhibition; the vast majority of the exhibits has the aura of artifacts, like objects fallen from time, many of them emanating a strong mystical, spiritual component.

The viewer embarks on a journey through time, the works are contextualised between the here and now and differing eras. In one series Martin evokes the impression as if we look at helmets from an antique collection, and yet they are of recent use. In another a piece a fractured rock resembles a Stone Age relic.

The separation between the artist and the object is abolished in two other works, where Kris Martin again deals with Dostojewski’s “The Idiot” and for the first time with Musil’s “The Man Without Qualities”. In both cases the artist and the protagonist become one – the innocent, naïve disturbing influence of prince Myschkin on the St. Petersburg society’s mask-like theater of the second half of the 19th Century is now replaced by Ulrich’s outsider view on the changing social life of the first half of the 20th Century. Kris Martin occupies their parts, and like them looks at the world somewhat astonished, bewildered and irritated, while he wanders casually through the ages.

Martin faces even sensitive issues with playful ease and subtle irony, provoking the questioning of our vision, experience and interpretation habits. A beggar’s cup becomes the Holy Grail. The Somebody drawings in the upper gallery point out the fleetingness of existence and the preciousness of life, even more so when one is aware of their medium. Again, we are led back to the earliest times, in the case of the Grail to our ancient myths, in the case of Somebody on the origin of painting and drawing, and the birth of the pigment.

“In the process, Martin does not act creatively, is not focused on establishing a personal handwriting or individual craft; his art is one of appropriation, of demonstration. To him, the world’s inventory suffices; he freely chooses from existing forms, symbols, systems, technology, anatomy, religion, the history of art and literature. He even uses drawing, which is usually considered to be an organ of artistic subjectivity and invention of the world, as a means to transport something else.” (Volker Adolphs, Kunstmuseum Bonn, 2012)
www.sieshoeke.com