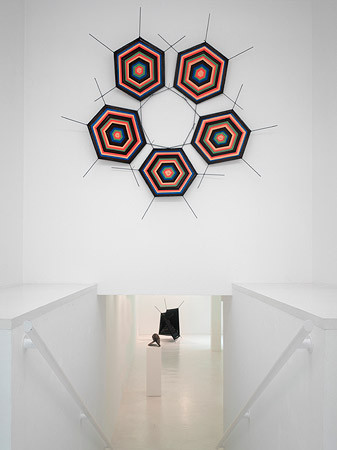 The artist Krysten Cunningham (*1973), based in Los Angeles, builds sculptural objects composed of shapes that appear to be geometrical and suggest a spatial structure. With the exhibition at the Sies + Höke Galerie works of the artist are shown in Germany for the first time.
A central theme of the works by Krysten Cunningham is the examination of space and time. The fabrication process of her sculptures is minutious: The figures constructed out of rods or antennas are successively spanned and hand-crafted by the artist with wool or yarn.
Cunningham combines technical material with textile handcraft and creates thereby a tactile spatial structure. The strength of the object by clearly defined shapes and boundaries is broken by its sensitive and haptic surface. The diversity of the sculptures that are perspectively suggesting several levels is also shown in the colourfulness of the used textiles whereby the interplay of shape and material creates three-dimensionality. Krysten Cunningham herself creates the colourfulness of the textile material by dyeing the yarn and wool manually. The direct intervention into the production of the object from the beginning of its creation, this meticulous undertaking, refers to the attentiveness of the artist to the detail, for defects and discrepancy. By the conscious use of these discrepancies in the creation of every single sculpture its uniqueness is stated and confirmed.
Her sculptural objects operate on both form and content. The objects interfere with the room through their pointed staves, but at the same time they sink into a self-referential dimension. This inner perspective that is caused by the “space inside the space” expresses itself in a complex articulation of context and concept. Cunningham creates voluminous sculptures that result in introvert as well as extravert resonating cavities through the constant interchange between movement and abidance.
www.sieshoeke.com