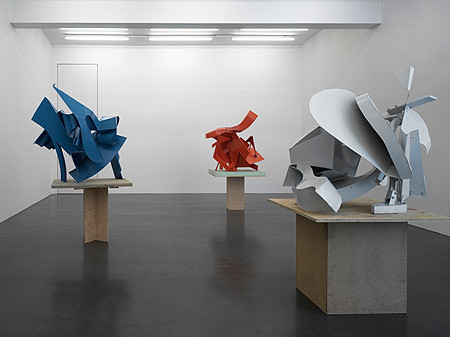 With Thomas Kiesewetter (*1963) Sies + Höke presents a new member of the gallery, who has already exhibited largely within an international context. It is the Berlin based artist’s third solo show in Germany presenting eight new works. Kiesewetters sculptures consist of bent, folded, riveted and welded pieces of metal, plastic or cardboard that he coats with monochrome colors and presents as abstract assemblages on self-made pedestals.
Besides sketches, a Marquette – a three-dimensional model made of cardboard or wood – is the starting point of every work. Often just loosely joined, arched surfaces organic in appearance lean against sharp-edged, geometrical forms. The transcription of these fragile constructions into the tough and resistant material of metal, as well as the combination of the various materials amongst each other, demand effort and patience from the artist and multiple step-procedures: heating, bending, cooling, painting, assembling.
All the more astonishing is the light, almost playful impression of the finished works that stand out due to their precise alignment of balance, their ambivalent material properties, shapes, volumes and arrangements. Due to the allover-coating with industrial paint in blue, orange, yellow or white the sculptures appear as if they were of one cast and each one asserts itself in the space with clear contours. At the same time their composition is clearly visible, due to their absurd, functionless arrangement and because the screws and rivets that are excluded from the color application are in contrast with the monochrome surface.
The pedestals accentuate the singularity of the works and add a concentrated distance between them and their surrounding. The homogeneous overall impression veers towards the unstable as soon as single parts of the sculpture reach beyond the center and the base, while their adhesion is only based on few contact surfaces and edges. The pedestals made of plain wood, sometimes natural in finish and sometimes coated, are always individually aligned with the sculptures and elevate them to eye level with the viewer. The casual parcours-like arrangement of the works within the space invites the viewer to draw closer, to walk around the sculptures and come up with associative references between them. Again the artist juggles contradictions by avoiding a presentation all too similar to that of a museum (the function of the pedestal in its classical sense), but at the same time abandoning a conceptual inclusion of the space (the installation in the contemporary sense). “Your eyes wander magnetized, your body follows and your thoughts start to dance: not alone but in a duet.“ (Almine Rech Gallery, Paris 2009). Thomas Kiesewetter deals with the physical presence of these similar movements between viewer and sculpture. His own disinterest in art historical references does not necessarily foreclose comparisons with artistic practices of modernity, like Vladimir Tatlin, Alexander Calder or Anthony Caro, whose abstract steel sculptures are self-referential and can be experienced sensually as well. Equally interesting are comparisons with younger contemporaries as Joel Shapiro, Manfred Pernice und Thomas Scheibitz. For Kiesewetter, a momentary movement and the passage of time are manifest in the forming of the material: “On the one hand there is pushing as in pressure. On the other hand there are things that are set in motion by this pressure, that are being pushed and that merge and in the end there is the prospect of falling. Pushing, merging and falling are movements that can be bent over for a moment and be guided into a different direction.“