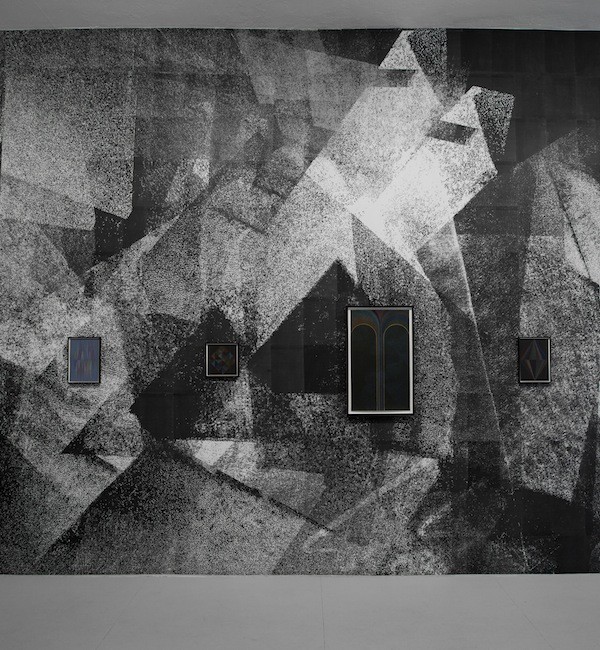 The concept of value indicates the significance we ascribe to different phenomena and has throughout history been associated with notions such as belief and faith, but also to models for appreciation and speculation in constant movement between the present and the future. Above the rim of the glass catches a moment in time where the surface tension is on the verge of spilling over, balancing on the edge of excess.

Mahogany by Jesse Jones tells the story of a fictional city set up in the void of the desert. The dialogue between the city ́s architect and the whisper choir made up of its inhabitants lets us know that the purpose of this city is to satisfy the ultimate desires of its people by offering a space of infinite freedom and excessive indulgence of pleasures and endless consumption. But is it really a city about to be built, or has it already fallen? Mahogany is the opening chapter of The Trilogy of Dust, a series of films located in various dry and barren landscapes that form an eerie backdrop to proposed dystopic future crisis we might face, opening up for critiques of our present reality. As in previous works by Jones, Mahogany investigates the consequences of our actions and how they may not only overstretch our resources’ carrying capacities, but also our sensory capacity to perceive reality itself.

The work of Lucy Skaer occupies the gap between object and representation, challenging our understanding of material and symbolic values and their changeability. The sculptures that are a part of Liquidity in the Mind of the Fool contain fragments of previous works connected through a chain of incarnations and their relation to the medieval allegory of the ship of fools: Ship ballast in the shape of copies of Brancusi ́s Newborn sculptures melted down to fit the ornament of a floor, and then the form cast again in miniature, transformed together with glass, tin, bronze, shells and fossils into new sculptures. A 16th century woodcut of the ship of fools, that has been changed into a secure bank note, is visible through a piece of glass, depicting a vessel populated by human inhabitants who are deranged, frivolous, or oblivious passengers aboard a ship without a pilot, seemingly ignorant of their own direction. Badly minted coins with their validating stamp sliding from the face of the metal disc, looking as if in between having an intrinsic value, like in the beginning of the history of money, and a symbolic one. Looking for forms that have been emptied out of meaning, but also for materials that gradually have become more abstract and empty of form, Skaer opens up for an inherent ambiguity constantly in motion.

When looking for ways to predict the future, the ancient tradition of melting tin on New Year’s Eve reminds us that it is wise not only to examine and interpret the shape of the solid tin cast, but also to take into account the effect of its shadow. Claudia Wieser ́s geometrically patterned wallpaper Proménade Géométrique, made out of black and white photocopies, draws its inspiration from hand made stage sets from the expressionistic movies of the 1920s that experimented with light and shadow effects in order to approach the world through a different point of view. Together with a series of abstract line drawings and a sculpture of mirror glass, the installation distorts our experience of the actual space and the image of our selves in it. A dense atmosphere is created that at the same time evokes associations to sacral environments as well as to apocalyptic predicaments of what might come next.
www.signalsignal.org