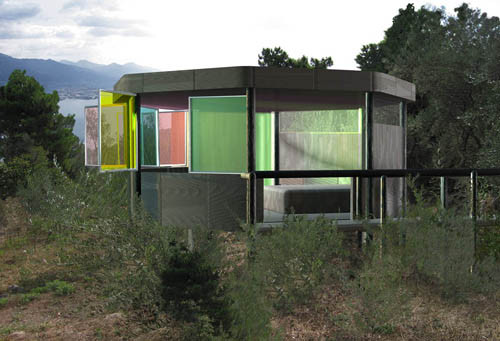 Concurrent with the exhibitions of Arturo Herrera and David Schutter, the gallery will present the installation Paradise......... Lost by Andrea Blum.
The artist describes the project as follows: Paradise.......... Lost documents a meandering through architectural space. The 4 walls of the gallery mark the transformation from a real house to the interior of an imaginary structure.
The house is an octagonal room with a spectrum of rainbow-colored windows, a private commission for the west coast of Italy; the mural is the imaginary explosion of that house sited in an undefined landscape; the chaise lounge incorporates a belljar into its design that contains particles from that explosion; and the framed drawing is an image of the particles inside the bell jar.
Since 1983 Andrea Blum has designed social sculptures for permanent and temporary projects in Europe and the United States. The work ranges in site and scale to include urban space, parks, exhibition design, libraries, domestic space, and furniture. Blum has exhibited in museums and galleries both nationally and internationally. Her numerous solo exhibitions including shows at Maison Rouge, Paris; Stroom Center for Art & Architecture, Den Haag; sTART Foundation, Venice; Henry Moore Institute, Leeds; and Storefront for Art & Architecture, New York. She has made special projects for the 2005 Venice Biennale, Centre Georges Pompidou in Paris , and the MUDAM museum in Luxembourg and is currently working on an exhibition for La Conservera Centro de Arte Contemporáneo in Mucia, Spain, to open in January 2012.
www.sikkemajenkinsco.com