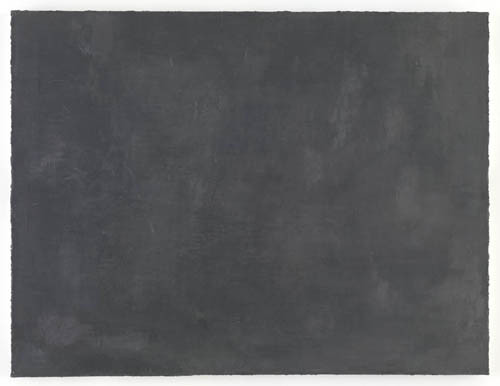 Sikkema Jenkins & Co is pleased to present an exhibition of new works by David Schutter on view from January 29 through March 5, 2011 in Gallery 2.
David Schutter’s current project addresses two still life paintings, one by Jean-Baptiste-Simeon Chardin (2 November 1699–6 December 1779) in the collection of the National Gallery of Art, Scotland and a second by Juan Sanchez-Cotan (June 25, 1560–September 8, 1627) in the collection of the Art Institute of Chicago. Having studied the two works firsthand through drawings, field notes, and archival research, Schutter has “re-made” multiple versions of each of the two paintings in a 1-to-1 scale with like materials and without aid memoires. Each set of paintings yielded different forms of drawing attendant to the paintings.
Less a test of memory, Schutter’s practice is more a phenomenological study that discusses the distances and problems encountered when making a painting. The works in the exhibition are as much performative re-enactments of the sources as they are discreet paintings and drawings, and as such form a painter’s repertory of extended rehearsals.
Schutter’s investigations are not homage, but instead a way toward understanding continued expectations that paintings function along historical values. In working with Chardin’s Vase of Flowers, Schutter directs an inquiry to an historical trope that values the perceptual immediacy of the painter’s hand in alla prima painting, or as in his rendition of Sanchez- Cotan’s Still Life with Game Fowl, attention is turned to the perception that Baroque chiaroscuro “reveals” in its illumination. In his approach to his subjects, Schutter locates his practice within the traditions of philosophical inquiry by beginning with the surfaces of things. His questions illicit responses to how we re-stratify our knowledge of the past while developing representations of the present, how we can uncover circumscribed categories and make new knowledge from the experience, and how repeated questions come to be ultimately forms of description in a world where the past is often a difficult and arguable anteriority.
.The exhibition is divided into two rooms. In the first, Schutter has installed 7 painted rehearsals of the Chardin. In the second room is a frieze of 18 drawings on vellum engendered during the making of these 7 works. Gestural in nature, these drawings are catch basins for tics, moves, and marks that that are disallowed entry into the paintings, and as such are an accumulation of utterances begotten by a sufferer of Tourette Syndrome. Also on view there are two rehearsals of the Sanchez-Cotan and three study sheets of prepared papers linked to these works. Unlike the vellums, these delicate chalk drawings and a silverpoint on tafelet are depositories for the few remaining thoughts at the end of Schutter’s lengthy painting process, and serve as a final emptying out of the accumulated data of the Sanchez- Cotan.
David Schutter has had solo exhibitions at The Museum of Contemporary Art, Chicago; the Gemäldegalerie Berlin, Germany; the National Gallery of Modern Art, Scotland; and with Tony Wight Gallery, Chicago; Aurel Scheibler, Berlin, Germany; and Sikkema Jenkins & Co, New York. Public collections include the Art Institute of Chicago; The Museum of Contemporary Art, Chicago; Gemäldegalerie Berlin, Germany; and the National Gallery of Modern Art, Scotland. Schutter received his MFA from the University of Chicago and completed his undergraduate studies at the Pennsylvania Academy of the Fine Arts, Philadelphia.
www.sikkemajenkinsco.com