I Am the Magic Hand - Organized by Josephine Halvorson 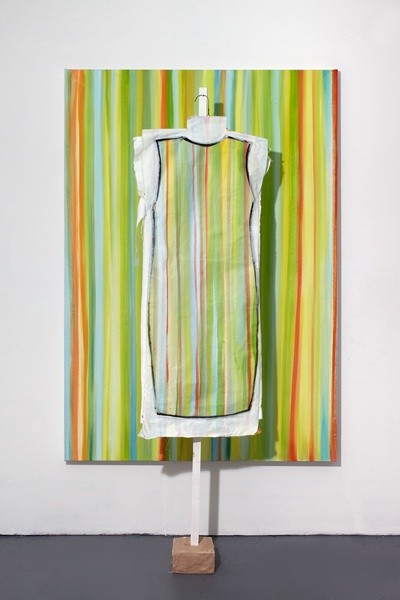 Sikkema Jenkins & Co. is pleased to present I Am The Magic Hand, a group exhibition organized by Josephine Halvorson that brings together the work of Allison Katz, Carmelle Safdie, Jane Corrigan, John Gutmann, Lisa Milroy, and Paula Wilson. The exhibition takes its title from a chalk inscription on a wall that appears in John Gutmann’s 1937 photograph of the same name. The outline of a hand and the inky stains of handprints surround the text, drawing attention to human presence and the animate nature of the wall itself. The works in this exhibition, like the wall, show traces of their makers yet speak in the first person. They emit their own liveliness.

Heads of cabbage pose for their picture in Allison Katz’s canvasses, which sit atop shelves made by Liudvikas Buklys. The cabbages’ untrimmed, languid leaves suggest natural informality, yet they’re in the spotlight, confidently attracting the attention of a man as he breathes in their earthy scent. On one hand, these are amorous images placed as keepsakes on shelves for visitors like us to notice. But on the other, painting itself is nature morte. Like cabbage, it exists in a vegetative state: aroused but not necessarily conscious.

Carmelle Safdie’s long banner-like rubbings evince a literal closeness to the individuals whose graves they mark. The gravestone, newsprint, chalk pastels, and Safdie’s gestures fuse together, creating a new layer of experience between the artist and the dead. What we see are instances of this encounter, preserved in pigment, and a metaphor for art. These color studies, as Safdie refers to the works, shift between the inert and the animate.

In Jane Corrigan's shoulder-width paintings, strokes of oily color become figures in action, forever unaware of being watched. Like a dream, these scenes are conjured yet undetermined, where Corrigan is a viewer into a world that she herself creates. The discernable paths of the paint and the enigma of the narrative form a riddle that Corrigan hands to us in a shared pursuit of interpretation.
Lisa Milroy’s life-sized painted dresses step away from flatness towards a willing body. We are made aware of our own nakedness and the way fabric feels against skin. The passive stance of painting is inverted: personal space is threatened, a seduction forthcoming. Or, the dress steps back into the frame of the pictorial after being out in the world, embodying memories of its wearer, a vestige of another time and place.

Between Two, Paula Wilson's freestanding tapestry made in collaboration with the Fabric Workshop and Museum, takes an impression of an urban façade. Felt, canvas, and paper blot the living history of two buildings, their residents, and passersby, picking up in relief architectural details and the sense of accrued time. Brick by brick, the seams of labor construct a composite identity, whose portrait is made by Wilson, and recognized by us.
-Josephine Halvorson

I Am The Magic Hand is organized by artist Josephine Halvorson. Halvorson works on site, collaborating with the environment to make paintings that become records of experience and time. Her work has been exhibited internationally and is represented by Sikkema Jenkins & Co., New York, and Galerie Nelson-Freeman, Paris. She is the recipient of several grants and awards, including a US Fulbright Fellowship to Vienna, and a Louis Comfort Tiffany Foundation Grant. Her work has been reviewed in The New York Times, Artforum, ParisArt, Modern Painters, The New Yorker, New York Magazine, and The Brooklyn Rail, among others. A recent article written by Halvorson appears in the Winter 2012 issue of ArtJournal. She teaches painting at Princeton University and The Cooper Union, and is a critic in the MFA program at Yale University. Halvorson lives and works out of Brooklyn, New York.
www.sikkemajenkinsco.com