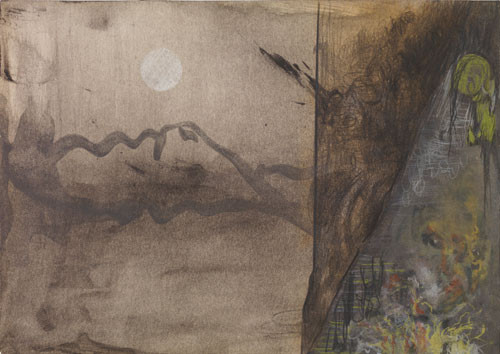 Sikkema Jenkins & Co is pleased to present an exhibition of new drawings and paintings by Jorge Queiroz in his debut solo show with the gallery, on view from October 21 through December 4, 2010.
Employing a wide range of techniques including pencil, charcoal, oil stick, gouache, Japanese ink, and oil paint; Queiroz creates works that explores the inventory of tensions between reality and imagination/ figuration and abstraction. The conflation of disjointed but harmoniously composed elements suggests a mysterious and enigmatic world in which narratives are hinted at but never fully resolved. This undefined narrative can be observed both within individual pieces as well as traced throughout the entire body of work. As the artist states, “...the perception of one work affects the reception of the next one.
Something perceived as an abstract structure or a fictional scene is altered by a flow of mental images, one melting into the other, from one work to the next. The observer is guided by an imaginative perception and by his own hypothesis about what he has just seen. The exhibition space is like a dynamic stage, on which each work stands for itself and creates relations with other works. This context allows the observer to store ideas and instigates the multiplication of these ideas, imaginary spaces and forms.”