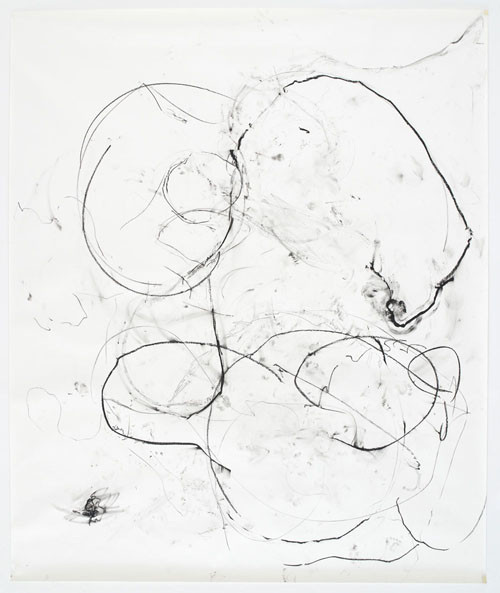 Sikkema Jenkins & Co. is pleased to present an exhibition of drawings by the acclaimed dancer and choreographer Tr isha Br own on view from December 9, 2011 through January 25, 2012.
For her second solo exhibition at Sikkema Jenkins & Co., the gallery will present a selection of large-scale drawings from Brown’s It’s a Draw dance/drawing series. It’s a Draw, performed between 2002 and 2008, collapses the division between a dance performance and a work on paper by literally drawing through dance, tracing Brown’s movements with charcoal or pastel stuck between her hands and feet.
Best known for her career as a postmodern dancer and choreographer, Brown’s drawings archive the normally ephemeral movements of dance. Twisting, turning, gliding, stretching, rolling, lying down or standing up, Brown performs with her full body on large sheets of paper placed on the floor. From the floor to the wall, the movements, a visual language of dance steps, are recorded. While dance emphasizes the fleeting and the momentary, the drawings demonstrate that dance can be preserved through artistic means other than photography or video.
Playing with the language of Abstract Expressionism, the It’s a Draw series uses the concepts of action painting and allover-ness literally as Brown performs on the paper. Rather than static marks, the lines made from her movements capture that same sense of continuous motion as her dance performances. Suggesting Brown’s ghostly presence, the drawings compel the viewer to attempt to reconstruct her dance.
Born in Aberdeen, Washington in 1936, Trisha Brown received a B.A. in dance form Mills College in 1958. After moving to New York in 1961, Brown became a founding member of the Judson Dance Theater where she worked with other vanguard experimental dancers. In 1970 she cofounded the dance collective Grand Union and formed the Trisha Brown Dance Company. Striving to create at the crossroads between visual art, performance and dance, Brown has conceived of pieces for alternative sites, most notably the rooftops and façades of Soho buildings.
Throughout her long career, Brown has combined the visual arts with her performances. She has collaborated with artists, such as Robert Rauschenberg, on set and costume designs. In addition, she has been producing her own visual art uniting the art of dance and the visual arts. Since the beginning of her career in the 1970s, drawing has been integral to Brown's artistic process. Beginning with diagramming her choreography through drawing, Brown has consistently used movement to generate graphic works.

Brown has received numerous awards over the course of her career. In 1991, she became the first woman choreographer to receive the MacArthur Foundation Fellowship and she was presented the National Medal of Arts in 2003. Brown was also named Chevalier dans l’Ordre des Arts et des Lettres by the government of France in 1988; was elevated to Officier in 2000; and then to Commandeur in 2004, the highest level awarded. Recently, she won the 2011 Dorothy and Lillian Gish Prize and the New York Dance and Performance (“Bessie”) Lifetime Achievement Award.
Trisha Brown’s visual art works have previously been exhibited at the Museum of Modern Art, New York (2011), the Whitney Museum of American Art, New York (2010), the Walker Art Center in Minneapolis (2008), Documenta 12, Kassel, Germany (2007), and The Drawing Center, New York (1998).
www.sikkemajenkinsco.com