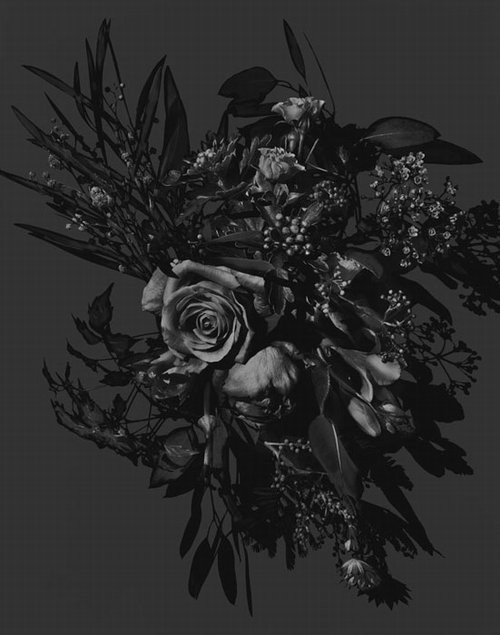 Concurrent with Barr’s exhibition, the gallery will be showing recent works by Valérie Belin. Like Barr, Belin has worked primarily in black and white.
Belin’s work captures her subject’s “object-hood” by isolating the subject from its contextual surroundings and accentuating abstract material qualities through the play of light and shadow.
On exhibit here are examples from several recent series including three photographs of a single lido girl dressed in different performance costumes and a still life of a bouquet of “Victorian flowers” in back and white.
Again, as with Barr, there are exceptions to Belin’s use of black and white. Her most recent foray into the use of color is a series of fruit baskets, two examples of which are on view here. These works are a response to still-lifes by Edouard Manet created for a solo exhibition at the Musee D’Orsay as part of the museum’s Correspondences series.
In addition to the Musee D’Orsay, Belin has been included in recent exhibitions at Galerie Jérôme-de-Noirmont, Paris; Museum of Modern Art, New York; International Center for Photography, New York; and Centre Georges Pompidou, Paris. A retrospective if the artist’s work traveled to the Huis Marseilles in Amsterdam, the Maison Europeenne de la Photographie in Paris and the Musee L’Elysee in Lausanne in 2007-08. In 2009, she had her first US museum solo exhibition at the Peabody Essex Museum in Salem, Massachusetts.
Belin’s works are in the collection of the Museum of Modern Art, New York; San Francisco Museum of Modern Art; the Norton Museum of Art, Palm Beach; Los Angeles County Museum of Art; Maison Européenne de la Photographie, Paris; Musée des Beaux-Arts et de la Dentelle,Calais, France; the Cartier Foundation, Paris; and the Bibliothèque Nationale de France, Paris.
www.sikkemajenkinsco.com