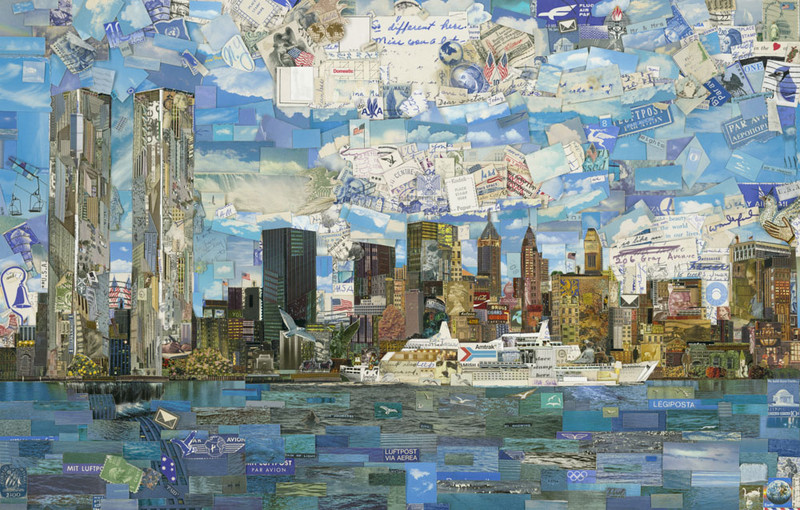 Sikkema Jenkins & Co. is pleased to present Album, an exhibition of new large-scale photographs by Vik Muniz on view from April 10 through May 10, 2014.

Album presents two new bodies of work – the eponymous Album series as well as Postcards from Nowhere. Muniz continues to explore the contemporary fragmented visual experience, with an increased emphasis on nostalgia and the materiality of photography.

The Album series utilizes found personal photographs, many treated in sepia tone, collected by Muniz over a number of years. The images composed are of familiar scenes that may be found in family photo albums - a portrait of a baby, a wedding, a school picture, or a vacation snapshot. These images reflect intimate yet universal narratives. With the proliferation of inexpensive cameras in the late 20th century, and by the ease and speed of digital documentation in more recent years, such images have become more common and less precious. Album questions the implications of these shifts in technology and image-making, and their impact on community, collective experience, and memory.

Postcards from Nowhere is similarly concerned with issues of loss and the dissemination of images. The rise of technology has greatly altered the material value of the postcard, as well as its traditional importance as a personal, tactile, and unique keepsake. The Postcards depict lost or drastically changed popular destinations – the Twin Towers in the New York Financial District, a once-luxurious beach in Beirut – that have been affected by technology as well as violence.

Born in São Paulo, Brazil in 1961, Vik Muniz is recognized for his photographs of reimagined largely art historical imagery, which he creates out of a wide variety of materials—from chocolate and sugar to junk and toys. His work has been exhibited widely throughout the globe and is included in numerous international public and private collections, including the Museum of Modern Art, New York; The Tate Gallery, London; Museu de Arte Moderna de São Paulo, Brazil; and Fondation Cartier pour L’Art Contemporain, Paris. Current solo exhibitions are on view at the Virginia Museum of Contemporary Art through April 27, and the Tel Aviv Museum of Art through August 2.