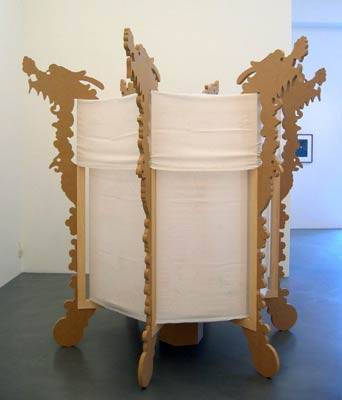 
7 brings together a group of contemporary Germany artists working across varied media and disciplines in an exploration of conceptual ideas and the constructed mythologies that inspire them.

Thea Djordjadze, born 1971 in Tbilisi in the Georgian Republic, combines found objects with the everyday materials surrounding us such as fabric, glass, wood, metal and ceramics in a practice that is informed by specific areas of interest. Djordjadze’s influences draw from widely from music and literature as well as early Modernism with particular reference to the Surrealists.

Born in South Africa in 1979, Gerda Scheeper builds sculptures from the familiar fabric of the everyday. Alongside household objects and materials, Scheepers uses fashionable textiles, resisting their immediate stylish or retro qualities and coaxing them into amorphous objects that are indistinct and oddly decipherable in same breath.

In the work of Robert Elfgen, religious and personal mythologies take centre stage. Born 1972 in Wesseling, Germany, Elfgen transforms the given exhibition space, manipulating diverse media while playfully setting narrative guidelines and developing a network of connections between homelands, journeys and their boundaries.

Notions of a homeland also play a central role in the work of Daniel Man who grew up in Augsburg, Germany moving there shortly after his birth in England in 1969. Contrary to Elfgen, however, who has a deeply sensed partiality in his works, reflecting a strong connection to his home town near Bonn and Wesseling, Man is symbolically in search of his roots.

Twin brothers Gert and Uwe Tobias, born in 1973 in Kronstadt Brasov in Romania, draw directly upon the clichés of their Transylvanian origin, utilizing their collective imaginations to play out and work through these stories to dramatic effect. These acts of storytelling externalize themselves in the form of large-format coloured wood cuts that range from straight and dewy folkloristic retellings to a sharp critique on inaccurate representation as a negative phenomenon.

Martin Wöhrl, born in 1974 in Munich, Germany, uses materials from DIY stores alongside the urban detritus easily found jettisoned in skips. To the western world they are familiar and accessible: fixing plates laminated with synthetic, Formica, adhesive letters, cellular rubber, cardboard, carpet and pieces of furniture.

Each of the artists included within the show looks at the flawed dynamics of representation and its ensuing and inevitable misrepresentation. Sprüth Magers Lee is pleased to provide a space for these acts of storytelling within the context of a strong and cohesive group show.
www.simonleegallery.com