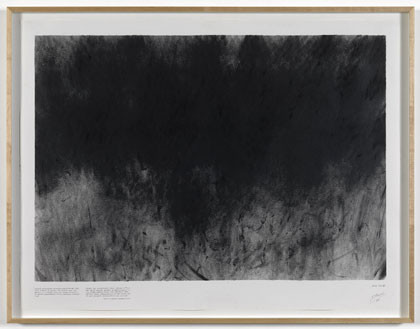 Ever since the late 1970s the art scene has been dominated by the incessant appropriation and recycling of various facets of modernism, as well as of Pop, Minimal or Conceptual art. Recently, however, the compelling need to emancipate from this heavy cloak of references has led many artists to turn to almost archaic gestures. Traces, imprints, scrapings, totems and pagan ceremonies are among the manifestations of this aspiration to new spaces of freedom, to new creative and expressive possibilities. In their day, the avant-gardes, too, drew on the energy of non-European, so-called “primitive” cultures in order to break with the prevailing order. Today it is no longer a matter of exploring the culturally or geographically unknown, but, for artists, to use “free of history” gestures to better deal with the needs of the present. Already, in the late 1950s and 1960s, similar strategies evolved as a reaction to the exhaustion of abstract painting (Gutai, but also Robert Morris, Yayoi Kusama or Bruce Nauman). Today, rather than ruptures, these artists are searching for new connections, of the kind that have too long been proscribed.

The works brought together for Barbaric Freedom do not represent an exhaustive survey of practices illustrating this idea; rather, they constitute a limited landscape that is contemporary in its very anachronism. Thus, works by Jasper Johns, Robert Morris, Paul McCarthy and Josh Smith demonstrate the use of marks made by parts of the body, be it the hand, finger or skull. As Georges Didi Huberman writes, in such works “produced by imprints, a timeless technique encounters a contemporary practice to produce a sudden flash.” Here, the imprint makes an abrupt, cathartic and temporary appearance in works by artists whose style is otherwise characterised by great formal sophistication. In pieces by John Armleder, Christopher Wool, Merlin Carpenter, Matias Faldbakken and Alex Hubbard, the trace is used as a way of circumventing the question of self-expression in favour or a more universal form of energy. While the resulting works may carry a negative charge, they use this power to break with habits and open up a new creative space. The creatures made by Annette Messager, Jim Drain and Stefan Rinck take part in imaginary ceremonies that mix together sorcery, paganism and animism. In contrast, Roberto Cuoghi and Sherrie Levine invoke the power of ancient cultures, the Assyrians and the Navajos, while, for Klara Liden, energy is summoned through bodily action in a mixture of dance and performance. Finally, Michelangelo Pistoletto’s shattered mirror takes in the ensemble, its gold edges incapable of limiting the infinite reflections of forms and life.
www.simonleegallery.com