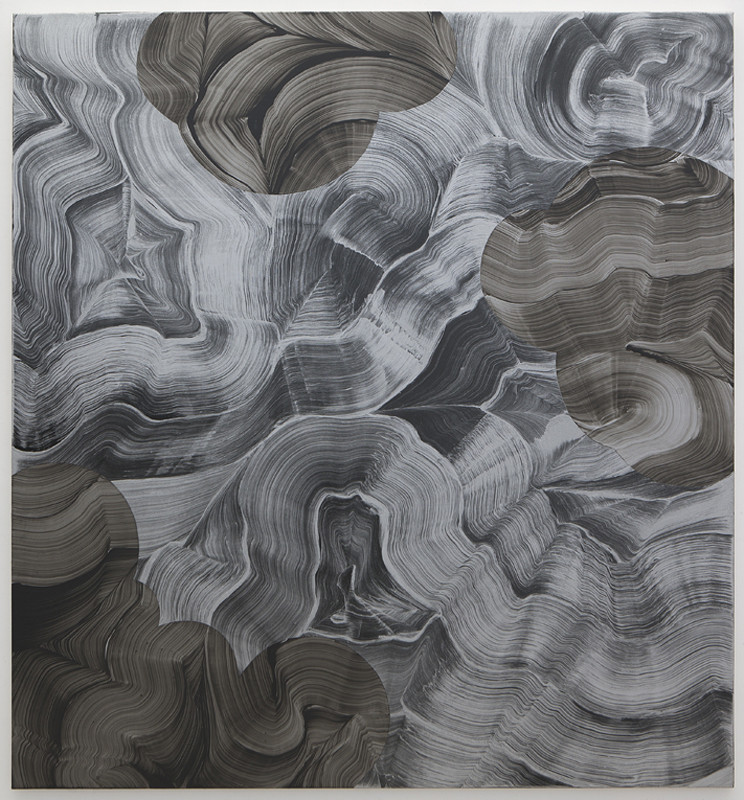 Simon Lee Gallery is proud to present an exhibition of new paintings by Bernard Frize, his third with the gallery. Unusually for Frize, this exhibition consists of paintings from a single series. They re-visit an earlier work; a labyrinthine painting made in 1986 on the ceiling of the Musée d’art Moderne de la Ville de Paris.

“In 1986 I painted the ceiling of a room of the Musée d’art Moderne de la Ville de Paris. Inspired, perhaps unconsciously, by the upper part of the walls of the Villa des Mystères, and especially by my amazement at the possibility of painting in several colours applied together on a wide brush, I filled the ceiling with paths and labyrinths until there was overhead a mass of colour as complex as the convolutions of a human brain. Over the years I made several attempts to recapture the sensations which this ceiling had given me, and I painted here and there a number of paintings which I thought of as details of that first work.”

The paintings within each of Bernard Frize’s series are often distinguished by subtle shifts in colour, weight, scale, and sequence while their motif remains constant. Here too there is a consistent language and technique, but the works in this show have something else in common. They are all doubles. Each act of doubling is specific, enacted sometimes within and sometimes between works. Some among these paintings become pairs, while others are divided and doubled within their confines, cut in two, painted twice, superimposed, above and below.

The titles, which normally in Frize’s work give so little guidance as to how to read them, in this case are instructive. Mescali and Mascile are repetitions, one of the other. Identical in size, proportion, formal device and even palette, the only distinction is that the sequence of colours on the single brush with which their paint is applied is reversed. Paradoxically this inversion has the effect of creating two similarly vibrant paintings that appear tonally and chromatically entirely distinct. Riamo uses the same strategy of reversal but the two sequences collide along a single horizontal fault line within the same canvas. Larimo is painted twice, the overlaid veil of pattern creating a spectral image of double exposure. Piatis also is painted in two stages. Pools of silver on black appear superimposed upon one continuous flow of black on silver; an inextricable interplay of positive and negative.

For Frize, this new cycle of paintings suggests, in its inherent combination of repetition and change, a way to trace the immutable nature of time, as well as to mark a circle that permits a new start. Each new beginning holds the possibility both of movement and of continuing in the cycle in which we are trapped.