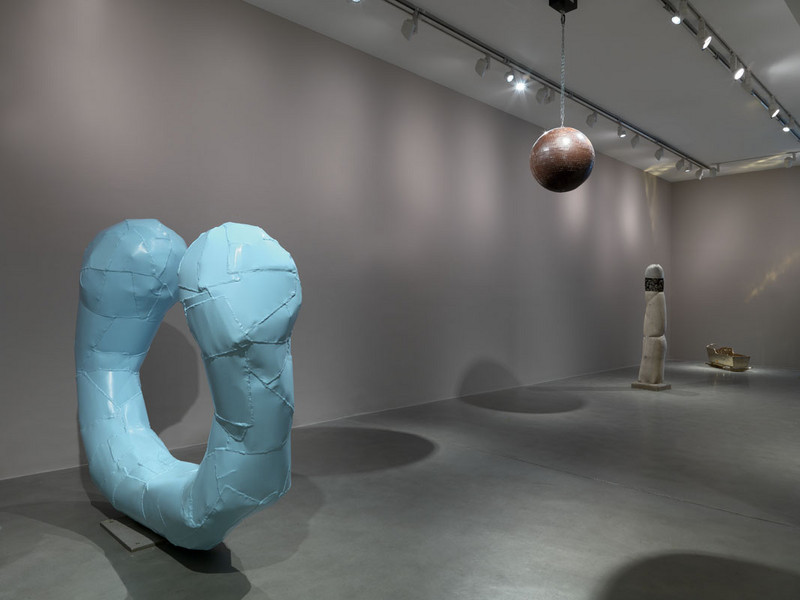 Simon Lee Gallery is proud to present Elective Affinities, an exhibition which brings together a group of sculptures which share an interest in narrative and prioritise content, reference and resonance over pure form. Proposing an alternative to the drive toward abstraction and the evacuation of content, the works in this exhibition insist on their relationships to their sources and antecedents and combine physical transformation with continuity of meaning. Whether through performance or materiality, as replicas or relics, they force the recognition of the ideas and processes by which they are made.
First used in the context of scientific research and classification in the late 18th century to describe dissimilar chemical substances that react with each other to form compounds only under specific physical conditions, the term Elective Affinities was adopted by Goethe as a metaphor for the laws that govern social bonds and interactions. This exhibition draws out a parallel system of relationships, between form and meaning, between the function of the appropriated object and the material from which its copy is fabricated, and between the physical and associative properties of the materials which the works combine.
Sherrie Levine's The Cradle (2009) is a dual appropriation. It refers to van Gogh’s painting La Berceuse of 1889, and makes material the cradle that the painter never depicted. For this act of materialisation Levine uses a wooden crib of just the type that the cord in the hands of van Gogh’s nurse might have rocked, and casts it faithfully in bronze. Narrative, appropriated and transferred content are united in its single polished form.
Similarly, Kelley Walker's Circle in Circle (2006) and Allora & Calzadilla's 2 Hose Petrified Petrol Pump (2012) represent amalgams of object and material in ways which throw both off kilter. The disco ball might be only an industrially mass produced chocolate scaled up, but hanging it from the ceiling shifts its meaning altogether, evoking a party which could only have ended badly. And the petrified pump for fossil fuel is more than a visual pun, making explicit the overtones of history, conflict and environmental consumption so blithely overlooked in its antecedent and turning it into a monument.
Matias Faldbakken's work in the exhibition consists of a concrete slab, cast by hand, on to which a ragged page torn from a book has been glued. The page depicts an image of J. D. Salinger walking away from one of the very few interviews he did between 1953 and his death in 2010. There is a formal rhyming in the sculpture between the torn edge of the paper and the rough cast of the concrete, but also a multiplicity of affinities between image and object, between the concrete and the street that Salinger walks, between time then and time now.
Michelangelo Pistoletto’s Il Fascio Della Tela (1980) is, as its name suggests, a bundle of rolled painted canvases. Its form is charged with political associations, the bundle evoking the symbol of strength through unity from which the Fascist movement took its name. The title of Hans-Peter Feldmann’s work in the exhibition, Homage to Monica Vitti (n.d.) also suggests its narrative content, while Gavin Kenyon’s Untitled (2014) and Ran Huang's The Rise and Fall of Desires Associating with Some Comfort (2012) both rely on the combination of counter-intuitive elements in the creation of material tension. Other works in the show expand and complexify these conceptual paths, all suggesting in their way the curiosity of the power of volition in the inanimate object.
www.simonleegallery.com