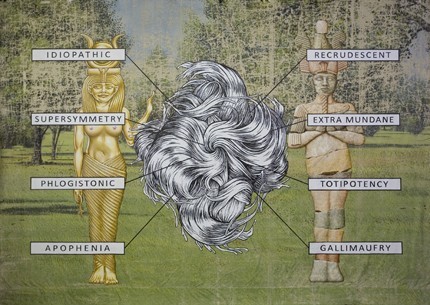 This body of work also sees Shaw continue to develop his phantasmatic religion, Oism. Complete with its own founding myths, sacred rituals, and counterfeit modern revivalist, Shaw’s constructed mythology draws attention to the tales of fantasy and fiction that permeate American identity from Mormonism to Hollywood. The comic book acts as a further source of fantastical narrative to which Shaw makes frequent reference throughout the exhibition; and comic book aesthetics are explored in a series of pencil drawings, as well as a group of sculptures that take the form of wigs styled into extravagant coiffures. A ginger Afro is bejewelled by shards of pink crystal, and a white and blue mane cascades like a waterfall, wrong footing the art world’s aura of elitism with an unsettling streak of absurdity.

A number of exhibited works derive from the artist’s dreams, an activity that previously occupied Shaw for almost a decade and resulted in the Dream Objects and Dream Drawings series. By allowing the flotsam and jetsam of contemporary life to wash up in his practice in this highly subjective way, Shaw conflates reality, myth and fantasy. A diverse array of imagery is mixed together in the spin-cycle of the artist’s subconscious, from which emerges apparently chance configurations of cultural debris that evoke the experience of wandering through a flea market. Shaw is part cultural historian, part shaman, compulsively chronicling the humorous and absurd facets of a late-capitalist society, as well as its sinister underbelly of moral anxiety and corruption. The schizoid unease of Shaw’s visual iconography is explored further in the painted and drawn portraits, in which dislocated and fractured body parts form a recurring motif and induce disquiet like a William Burroughs ‘cut-up’.

Abundance operates as a critical strategy in Shaw’s work, and each image offers a cornucopia of signification so hypertrophied that it resists the interpretative resolutions that might diffuse it. For example, in a single image we encounter abstruse jargon that recalls the language of pseudo-science, painted Egyptian-style figures reminiscent of ancient arcane, and a found theatre-set backdrop evocative of nineteenth century representations of the American landscape. It seems that Shaw’s psyche experiences an irresistible impulse to explore the flood of imagery to which it has been exposed, resulting in work that is often saturated with references to mass-market consumerism, art history and psychoanalysis. The artist’s use of references, seemingly, without referent induces a sense of Jean Baudrilliard’s ‘hyperreality,’ which brings the concept of ‘reality’ itself into question.

Born in Midland, Michigan in 1952, Jim Shaw has had major solo exhibitions at the ICA in London, P.S. 1 Contemporary Art Centre in Long Island, MAGASIN Center of Contemporary Art in Grenoble, CAPC - Musée d’Art Contemporain in Bordeaux, The Kunstverein Frankfurt and at the St. Louis Museum of Art. Shaw’s work also features in prominent public and private collections around the world, such as the MoMA and Solomon R. Guggenheim Museums in New York, the Mamco in Geneva, the Los Angeles County Museum of Art (LACMA) and the Walker Art Center in Minneapolis. A major retrospective on the artist is on view at the BATLIC Centre for Contemporary Art in Gateshead through 17 February, and a selection of films from the 1980s to the present will be screened at the ICA on 13 February, followed by an artist talk.
www.simonleegallery.com