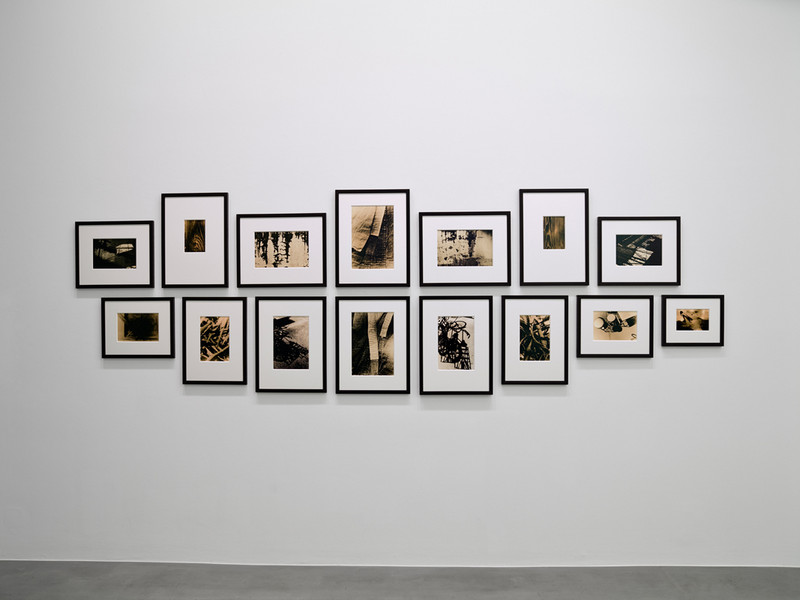 Simon Lee Gallery is proud to announce a solo exhibition of new work by the London–based Portuguese artist, João Penalva, his third with the gallery.

While he works across many media, photography is central to Penalva’s practice. At the core of his use of the medium is the ambiguity of its relationship to fact and fiction. Often shown accompanied by narrative text, Penalva’s photograph, slide and film installations suggest themselves as documentary, but jarring notes or a fictional tone offer other potential readings. This uncertainty seems to question the very possibility of the photograph to act as an independent or impartial document.

One major new series of works in the exhibition consists of large scale photographs of London pavements taken at points along the artist’s daily routes between home and studio, printed onto linen and mounted on aluminium. No less formal compositions for being readymade, like all of Penalva’s photographs these works are historical documents. Records of surfaces laid down over time by the addition or replacement of material and texture, they stand as transcripts of the labour that makes them and of the passage of man and machine across their surface. As documents of a lived landscape, they call to mind Freud’s analogy of the aggregation of psychological experience with the architecture of the Eternal City. Beneath the soil of the contemporary city can be found the memory-traces of its past, but that history is also preserved on the surface of the city’s streets. In their transposition of horizontal to vertical, in their insistence on base materiality and in their entropic collapse of figure / ground distinction, these photographs recall as well Rosalind Kraus and Yve-Alain Bois’ reading of Bataille’s concept of l’informe, complete with its associations of modernist and anti-modernist artists, from the Sacchi of Alberto Burri to Andy Warhol’s oxidation paintings.

Shown alongside these large scale images, small format silver gelatine prints are also titled after the places the photographs were taken, mostly in areas of Tokyo. Their title includes as well the name Michio Harada, and for each a date, between 1966 and 1978. A book accompanying the exhibition reproduces these and other works by the Japanese photographer. This is an exhibition within an exhibition, an appropriation or homage, but the precise status of these works — their authorship, the place and date of their making, is unclear.

This ambiguity casts doubt in turn on the status of the street pavement photographs, and continues in the exhibition’s final element, a slide installation entitled Monument shown in the lower gallery. An image of a photographic enlarger is projected alongside a text describing three members of a single family from Northern Ireland, one of whom is supposed to be the photographer. The work suggests an exercise in genealogical reminiscence, but also the weaving of a complex and whimsical story, perhaps fact, perhaps fiction, that crosses generations.

João Penalva was born in Lisbon in 1949 and has lived and worked in London since 1976. He represented Portugal in the XXIII Bienal Internacional de São Paulo in 1996 and in the XLIX Biennale di Venezia in 2001, and was awarded the DAAD Berlin Artist’s Residency in 2003-2004. He exhibited in the Berlin Biennale 2 (2001) and the Biennale of Sydney (2002). His work has been shown extensively in museums and public institutions. Major solo exhibitions include: Trondheim Kunstmuseum, Trondheim (2014); Kunsthallen Brandts, Odense (2012); CAM - Fundação Calouste Gulbenkian, Lisbon (2011); Lunds Konsthall, Lund (2010); Serralves Museum of Contemporary Art, Oporto (2005); Ludwig Museum — Museum of Contemporary Art, Budapest (2005); Rooseum Center for Contemporary Art, Malmö (2002); Tramway, Glasgow (2000); and Camden Arts Centre, London (2000). His work was recently included in the group exhibition Conflict, Time, Photography at Tate Modern, London (2015), which will travel to Museum Folkwang, Essen, in April 2015.
www.simonleegallery.com