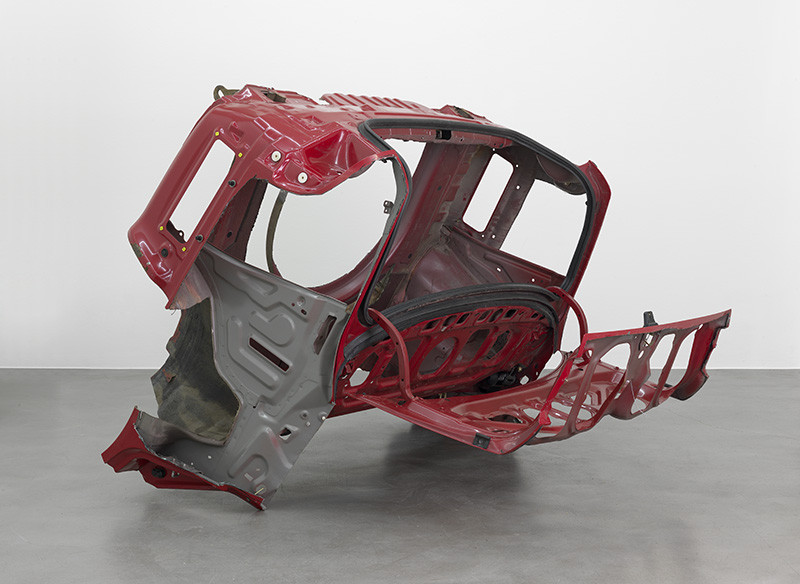 Simon Lee Gallery is proud to present a solo exhibition of new work by Matias Faldbakken, his third with the gallery.
In the 8 years since his participation in the Venice Biennale in 2005, where he represented Norway in the Nordic Pavilion, Matias Faldbakken has become internationally recognized as one of the foremost artists of his generation in Europe. His practice holds in perpetual tension the forces of proposition and cancellation, vandalism and erasure, aesthetic generosity and conceptual restraint, the possibility of language and its abstraction into illegibility.
A consistent characteristic of Faldbakken’s work is the poverty of his materials. Earlier series have used framed garbage bags and flattened cardboard boxes as the ground for abstract or minimal gestures. Most recently the marks on the surface of these works have moved from within the frame to the surface of the glass and the edges of the frame. Smudged and erased, they propose a mark and its effacement in a single gesture.
For this exhibition Faldbakken will present a series of framed canvas sacks. Painted on their backs, it is only that part of the mark that bleeds through the fibres of the sacking that is visible, so that they at once reveal and withhold their motif. Alongside these works Faldbakken will show a series of sculptures made from car boots. A vehicle for transport (and exchange) the car boot is also charged with pop cultural history and is often associated with (fictional) violence (illegal trade, abduction, and so on); a frequently recurring theme in Faldbakken’s work.
Both sacks and trunks can be considered a development of Faldbakken’s ‘container works’, which include jugs, jerry cans, bags, lockers, bottles, books, VHS cassettes, cardboard boxes and more. Subject to various manipulations and often rendered useless; stacked, crushed, flattened, painted, cut, ‘everted’, spilling their contents, becoming their own content, the containers that Faldbakken adapts often veer between the iconic and the almost painfully generic.
In October 2013 Matias Faldbakken will be the subject of a solo exhibition at Le Consortium, Dijon curated by Anne Pontégnie.
Faldbakken (b. 1973), lives and works in Oslo. He studied at the National Academy of Fine Arts in Bergen and later at the Städelschule in Frankfurt am Main. His work has been exhibited widely in Europe. Important recent solo exhibitions include: ‘Portrait Portrait of of a a Generation Generation’, at OCA, Oslo and Wiels Contemporary Art Centre, Brussels; ‘Intervention #21: Matias Faldbakken’ at Museum Boijmans van Beuningen, Rotterdam, ‘Matias Faldbakken’, The Power Station, Dallas, ‘That Death of Which One Does Not Die’, Kunsthalle Fridericianum, Kassel, ‘War After Peace (After War)’, Neue Aachener Kunstverein, Aachen, ‘Shocked into Abstraction’, IKON Gallery, Birmingham, and the National Museum of Oslo, and ‘Extreme Siesta’, Kunsthalle St. Gallen. In 2012 Faldbakken participated in Documenta 13 in Kassel.
www.simonleegallery.com