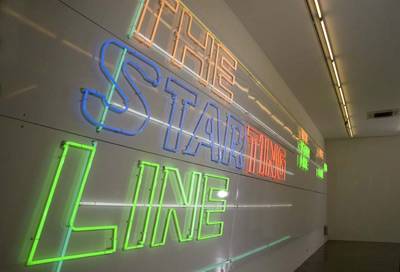 
Michel Majerus was a prominent member of a new generation of artists who emerged from Berlin in the 1990s to international recognition. During his brief career (b. 1967-2002); he produced a diverse array of works which deftly hovered between painting and installation.

Majerus came to notoriety during the mid-1990s with artists such as Tobias Rehberger, Franz Ackerman and Jorge Pardo. With these artists he shared similar concerns and the desire to extend the possibilities of painting. Rehberger’s use of surfaces and design metaphors; Ackermann’s predilection for wall painting and Pardo’s computer generated manipulations all have resonances with Majerus. He emerged as a key exponent of this scene. The evident pleasure that he took in painting was always punctuated by detachment and an often ironically distanced view. His training at the Stuttgart Academy under the pioneer and father of Conceptual Art, Joseph Kosuth highly influenced Majerus. His idea of the expanded two-dimensional picture grew in-part from Kosuth’s works. Majerus strove to venture into new definitions of painting – aiming to destabilize the image especially with his installations – using elements comprising; neon, computer prints, silk-screen, video’s and architectural inserts. In later works Majerus employed sharp and decisive slogans that became important features, derived from the mass-media that triggered the viewer into a world of gaming culture, popular psychology and movie jargon.

His ability to work with a plethora of references extends beyond post-modern quotation. A key development in art of the last two decades is the notion that objectivity and abstraction have unarguably moved closer together, artists of Majerus’ generation are well aware of this fact and have sought to treat this concept irreverently. In light of this cohesion Majerus freely interchanged visual codes such as gestural brushstrokes with graphic illustration. He was simultaneously addressing painting in relation to more recent methods of representation such as computer generated imagery and the moving image. His choice of recognizable images collide with the painterly codes and conventions developed through twentieth century painting, established him as an artist who knew what he wanted and knew the quickest way of achieving his aim.

Central to Majerus was his distinctive ability to elusively orchestrate a pre-existing stock of images that regularly bombard our senses and perceptions. He recognised the opportunities to place his subjective spin on the often homogenous motifs and stylistic elements that emerge from the mass-media. His works sidestep hastily reductive interpretations and adeptly define an individual relationship with the bewildering conglomeration of digital technologies and consumer choices present in global cultural media.