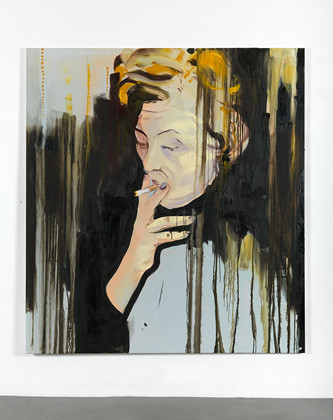 For her first solo exhibition at Simon Lee Gallery, Paulina Olowska will show a group of new paintings which continue her exploration of feminist and socially engaged themes, of shifts in cultural perspective between East and West and of the female figure as archetype.

Much of Olowska’s recent painting has paid homage to women artists, often overlooked, whose works have influenced or inspired her. Pauline Boty, the pioneering British pop artist, until recently more known as muse than painter, Zofia Styrenska, whose motifs were appropriated by the Polish state without acknowledgement or permission, and Alina Szapocznikow the avant-garde sculptor, who represented Poland in the Venice Biennale of 1962 have all appeared as subjects of Olowska’s recent exhibitions and return as echoes here. But their influence in this group of paintings softens into a reflection on the archetype of the female image, the idea of the muse in its most rudimentary form, and the portrait of a mother, remembered or imagined.

In their photographic quality, as well as in their fashion-plate composition, these new works refer back to Olowska’s own paintings based on appropriated images of knitwear or dress models, to the work of American photographers of the 1960s and 1970s such as Helen Levitt, William Eggleston and Leo Rubinfien, or to photographs taken from the magazine Ameryka, published in the 1970s by the American Embassies in Poland and the USSR, which has also been a recurring source. But in stark contrast to the static commercial and propagandistic images which those works embody, this new series of paintings has a striking transience and fragility, a sense of an observed or remembered moment, captured in time.

Paulina Olowska was born in 1976 in Gdansk, Poland and studied at the School of the Art institute of Chicago and the Academy of fine Arts, Gdansk. She has undertaken scholarships and residencies in The Hague, Lisbon, Japan, the Rijksakademie in Amsterdam and at CCA Wattis, San Francisco. Her work has been exhibited internationally and in biennials including Venice (2003), Moscow and Istanbul (both 2005) and Berlin (2008), for which she re-created a series of paintings by Zofia Styrenska. Other exhibitions include Accidental Collages at Tramway, Glasgow (2010), Shadow with a Sneak at Pinakotek der Moderne, Munich and metamorphosis at Museum Abteiberg-Manchengladbach, where she rebuilt the architecture of a mid-20th century New York hairdressing salon as a closed installation. She has undertaken frequent collaborations with artists including Bonnie Camplin: their two-part exhibition Salty Water/What of Salty Water was shown at Portikus, Frankfurt in 2007; Frances Stark and Lucy Mckenzie, with whom she created the now legendary bar, Nova Popularna, in Warsaw in 2003. Concurrently with the exhibition, from 3rd to 5th May, she will give a series of performances at MoMA, New York.
www.simonleegallery.com