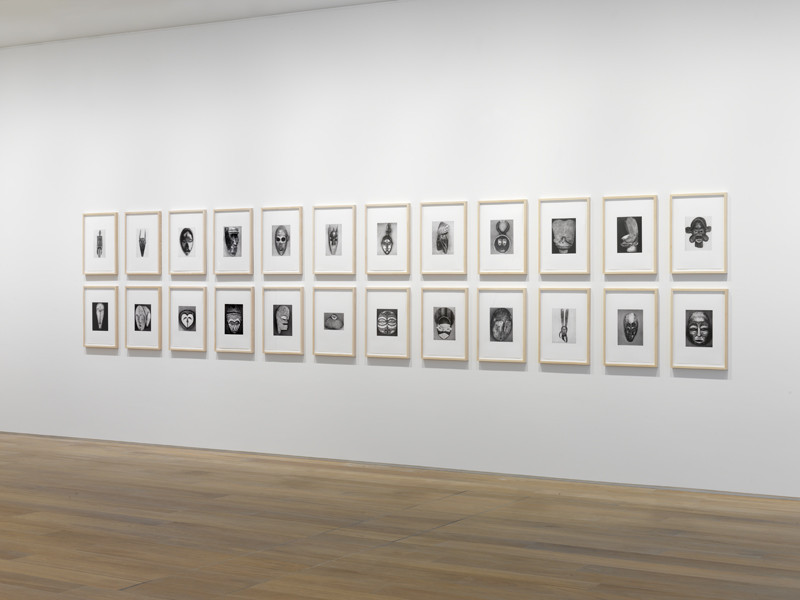 I don’t think it’s useful to see culture as monolithic. I’d rather see it as having many voices, some conscious and some unconscious, which may be at odds with one another. If we are attentive to these voices, we can collaborate with them and create something new. – Sherrie Levine

Simon Lee Gallery is proud to present a solo exhibition of new photographs by renowned American artist Sherrie Levine. African Masks After Walker Evans continues the artist’s questioning of traditional ideas of originality and authorship, developed over four decades, and her interest in the deconstruction of images and objects from the past in order to create new relationships with contemporary audiences today. Through repetition, duplication and restatement, this new series not only re-examines the central and ongoing concerns of Levine’s artistic practice but also revisits one of the most prominent subjects of her oeuvre – the work of Walker Evans.
Throughout her career, Sherrie Levine has periodically returned to the practice of re-photographing photographs. Arguably her most famous work, the After Walker Evans series (first conceived in 1981) received widespread critical acclaim and is seen as a key work of postmodernism. Between 1928 and 1935, Evans was commissioned to document life in the American South at the height of the Great Depression. For her own work, Levine photographed 22 reproductions of Evans’ iconic images that she found in a book of his photography. These photographs exist for Levine, not as copies, but rather as different iterations or versions of their precedents, challenging not only the notion of authorship but also the materiality of history itself. In Levine’s words, ‘The ‘after’ in these works denotes more than the condition of derivation or indebtedness. It is also the temporal and historical ‘after’ as in; ‘Our world comes after Walker Evans’’’.
Thirty-five years later, in a new series of photographs after Walker Evans, Sherrie Levine returns to the earlier project, however, this time the lines between object and image, ownership and authorship are even further blurred. Her subject matter stems from an extensive collection of over 400 photographs of African artworks that were taken by Evans in 1935 when commissioned by the Museum of Modern Art in New York to document the objects of the major exhibition “African Negro Art”. The original photographs were used to create portfolios that travelled to museums across the country, playing a key role in a western reading and understanding of African art, and the canonisation of the objects they reproduced.
For the series African Masks After Walker Evans, Levine has selected 24 images of masks from the original portfolio. By calling attention to their relationship with Walker Evans’ ‘originals’, her images ask complex and multiple questions about the relationship between image and object, original and copy, and in turn question the relationship of Walker Evans’ own images taken in 1935 to the original African objects, and their role in establishing the curatorial canon of so-called ‘Primitive’ art at the time.
www.simonleegallery.com