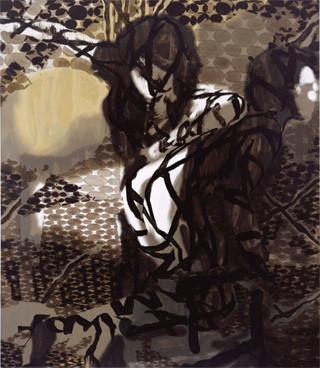 Simon Lee Gallery is proud to present its second solo show by British artist Toby Ziegler. The artist's work confronts art historical models in a digital age, and relishes the fallibility and serendipity inherent to the act of making, vis-à-vis it’s computer generated origins. Ziegler exhibits three sculptures, which refer to historical man made effigies, and three new paintings, his first to depict human figures.
Entering the gallery the viewer is forced to walk between two vast sentinels constructed from cardboard and gesso; The Liberals are reminiscent of lumpen Victorian pottery dogs but stand around three meters in height. The original Staffordshire pottery dogs, inspired by Oriental lion dogs were produced from the 1720’s, but they proliferated in the nineteenth century and exemplify Victoriana.
A second sculpture is titled Victoria. This large, black slug-like form takes inspiration from statues of the monarch that lurk in British town centres, but have been rendered almost subliminal by the passage of time. Ziegler looks back to historical icons, which he manipulates to illustrate the apparent erosion that happens over time, as objects are reproduced and duplicated, and consequently reduced to the status of fetish pieces.
This sculpture is flanked by the three paintings in the show, which derive their source imagery from Victorian pornographic photography. The formalised, compromising positions of the figures in these works seem at odds with titles such as Teambuilding and Social Contract, which allude to the liberalisation in political, social, inter-personal and sexual spheres, which are linked to the lifestyle of modern society. Ziegler's gestural involvement and handling of his medium display an unprecedented freedom. Fast and loose brushstrokes interlace with geometric backdrops on the canvasses. These dynamic images invite an in depth reading of the presented figuration, which dissolves into abstraction with closer proximity.
The final sculpture in the show is a group of facetted torsos and body parts mounted on a frame of metal rods, reassembled like fragments of classical sculpture in a museological display. The structure and the title of this piece, Resistance Equipment refers to modern gym machinery, in contrast to the Athenian Gymnasium. Is Ziegler suggesting we need more philosophers and fornication at Fitness First?
Toby Ziegler lives and works in London. He has had several solo exhibitions both in the UK and abroad, notably at the Yorkshire Sculpture Park in Wakefield and Chisenhale Gallery in London. He has also contributed to numerous group shows, such as the currently travelling Hamsterwheel, initiated by Franz West, and the recently opened Parkhaus exhibition at the Kunsthalle Düsseldorf. Ziegler’s work also features in significant public and private collections, such as that of the British Council, the Arts Council and the Tate Gallery.
www.simonleegallery.com