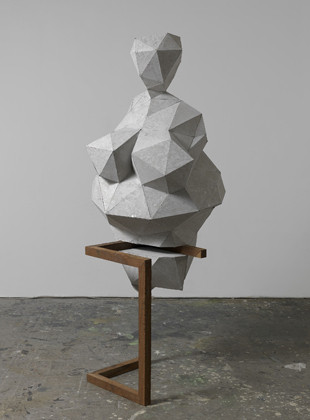 Simon Lee Gallery is pleased to announce our third solo exhibition of new work by British artist Toby Ziegler.
This group of paintings and sculptures deal with ideas of memory in an age of digital technology. The works trace an analogy between the degradation of images caused by repeated reproduction, and the systematic erosion and reinvention of memory over time.

Both the sculptures and paintings begin with found images. Archaelogists' grainy photographs of Palaeolithic stone carvings and low resolutions jpegs of Flemish Old Master paintings serve as motifs, and seem to refer back to a past in which painting and sculpture functioned as both parable and symbol. The analogy is extended by Ziegler's process of approximation that comes with digitally manipulating these images and then finding analogue equivalents for the pixels and virtual polygons that result.

In the paintings, there is a vicissitude from brush-mark to pixel and back to brush-mark. The original images are inverted, desaturated, fragmented and then rendered in translucent oil paint on aluminium panels. They appear like an after-image, bleached and emptied of content by over-exposure. Figuration is further obscured by layers of painted geometric gesture: an arrangement of air-brushed blobs, which appear almost to float in front of the picture plane, like the floating spots which come with decaying eyesight or the mist of breath on a window pane.

The sculptures undergo a parallel transformation, which begins once the flat source image is redrawn as a three dimensional model. Deliberately approximate, the sculptures are then fabricated in oxidised aluminium, which forms a hollow metal skin. The figures are supported, suspended and penetrated by simple wooden geometric armatures recalling Sol LeWitt’s open cubes; and the frames, which snake around and through the figures, act as plinths, retort stands and prosthetic limbs.