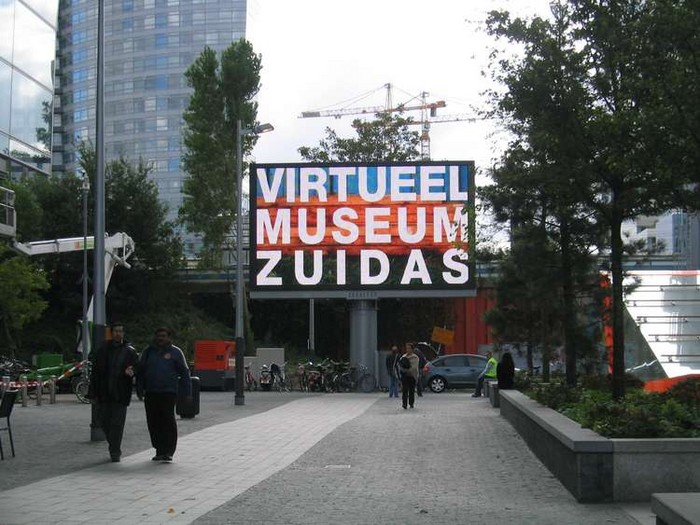 Moving images in the public domain? Although the general public is already familiar with public art, video art has hardly been implemented into the public domain. Nevertheless, the Zuidplein (next to the NS station Zuid/WTC in Amsterdam) now hosts an enormous LED screen that’s 7.5 meters wide and 4.4 meters high. The programming for this massive screen - which will broadcast from early in the morning until late at night – consists of 80% video art from internationally acclaimed artists and promising young talent and 20% advertisements and announcements. Like a modern moving painting, this screen serves to boost the dynamic character of the Zuidas area for the coming two to five years.

At 5.00 pm on Friday 5 October, Maarten van Poelgeest (Alderman of Urban Planning for the City of Amsterdam) will conduct the official opening. At the same time a spectacular artists’ performance by Roel Wouters and Luna Maurer will take place.

The aim of CASZ (Contemporary Art Screen Zuidas), which was initiated by Virtueel Museum Zuidas and SKOR, is to allow people to gain a different perspective on moving images. Exhibition curator Jan Schuijren, who compiled a well thought out program for the screen, saw potential opportunities in the Zuidas, mainly through the people who live and work there. Indeed thousands of people pass through this location on a daily basis, often two to four times a day, five days a week. For Schuijren, this recurring dynamic formed the framework on which he based his program. Firstly, the screened works needed to offer the option of voluntary viewing. The morning program will consist of light, short and abstract images; the afternoon program will focus more on human attention and perception and will offer thought-provoking short films; and the evening program will screen longer works, from arthouse films to unique music films. The broadcasts also include sound, which will normally be made available to viewers through their mobile phones (free service) or - during special events - through the screen’s own built-in sound system.
The project was organized in collaboration with various cultural institutes in the Netherlands and abroad, including Montevideo, the Filmbank, the Sandberg Institute, the Impakt Festival, Park4dtv and Argos Arts in Brussels and, as of next year, the Holland Festival.
The first annual program to be screened on the Zuidplein will include work by artists like John Wood and Paul Harrison (UK), Michel François (B) and Guido van der Werve (NL), as well as illustrations by Dan Perjovschi (Rom) and the work of around 200 other artists.
This specific focus on the integration of art in public space has received full support from the City of Amsterdam, urban developers and investors, all of whom attach great importance to the cultural climate of the Zuidas. The latter should increase the general pulling power of the area and encourage companies and families to establish themselves there as well as provide an essential contribution to the liveliness and (international) reputation of Zuidas.
www.skor.nl