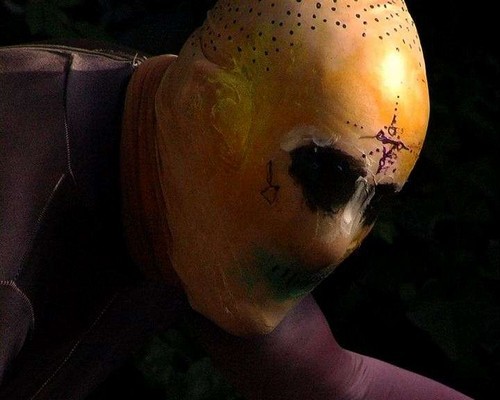 The third project in the series The Precarious State showcases a video by Katarina Zdjelar (Serbia, 1979). Taking Place follows the weekly routines of a group of people in Rotterdam. A few times a week, after their day jobs, this group of friends meets up in their local community space to spend their free time together. During their gatherings these Rotterdamers seem to become possessed by the spirits of their neighbours, non-native Dutch citizens of various backgrounds. In doing so, they adopt their neighbours’ physical appearances as they engage in a self-initiated and self-developed ritual. This video work brings to mind Jean Rouch’s Les Maitres Fous, a documentary filmed in 1955 about the annual ceremony of a religious sect, the Hauka, who entered a trance and were possessed by various spirits associated with the Western colonial powers. This filmed event was not staged by the artist.

The Precarious State
The concept of national identity dominates the public arena. Indeed, language; nationality; religion; a collective past; and shared values, give people “a sense of belonging”. And yet, in this era of migration and globalization, it is still necessary to consider the possibilities of constructing one’s identity and establishing oneself in a foreign environment. According to Nicolas Bourriaud, the era of radicality (“radical” in the sense of having roots) is over. Rather, what lies ahead is personified by the radicant: “instead of returning to origins it will let its roots grow in keeping with its forward movement. * The radicant does not inhabit an ideal structure *, but rather a precarious state. It constructs its route from what it finds.”1

SKOR believed that it would be interesting to approach the concept of cultural identity from this angle. Accordingly, the four artists have examined the issue by using the below questions as guidelines:

·What kind of path must/can someone follow in order to rebuild his/her identity?
·Which mechanisms are at work to allow individuals to feel like they belong to a group?
·Could De Inkijk function as a “space of translation” (according to Bourriaud “a common place including me and the other”)?

With The Precarious State, SKOR questions whether there are any new angles from which to view the concept of identity.

1. ‘On Altermodernity. Nicolas Bourriaud in an e-mail interview with Rita Vitorelli’, Spike 11, 2007.