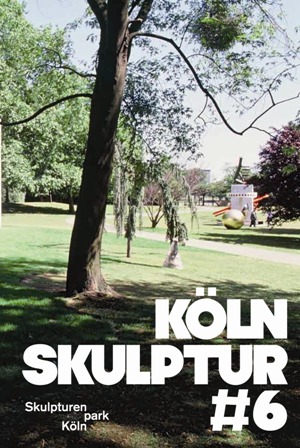 The exhibition KölnSkulptur #6 has cast the park run by Stiftung Skulpturenpark Köln in a completely new perspective: the park grounds have been extended and can be experienced in a host of ways thanks to the sightlines and routeways.

At the centre of the new concept is a garden pavilion by Japanese architect Sou Fujimoto, which through its size, shape and alignment forms an antithesis to the foundation's now publicly accessible building. This Garden Gallery continues the tradition of classical park architecture and will serve as the pivot for works that are already in the park and that pick up on motifs in the architecture, such as the already existent sculptures by Jorge Pardo, Heimo Zobernig and Dan Graham. This direction in sculpture, which is informed by architectural motifs, can be seen in new works by Olaf Holzapfel and Bernard Voïta.

Another major pivotal point is the project by Florian Slotawa, whose contribution Kölner Reihe has set out to produce an objective presentation of the works in the collection: seven pieces from the park, which all may be considered landmarks in the original idea for the sculpture park, are arranged in a row according to size. With this the works that previously had been scattered about in a decentralised manner will be concentrated together as an exhibition within an exhibition and spark an unexpected dialogue on the formal connections they share between lines and volumes.

The new works all share a concern with materials and their processing, in the manner already indicated by the works in park by Ulrich Rückriem - sculptures that combine minimalist forms with a kind of narrative and that reveal themselves as a process of seeing: a boulder covered by a hide by Johannes Wald, Jimmie Durham's monumental tree trunk that hails from foreign climes, a terracotta sculpture by Katinka Bock that will only later be fixed in ceramic form, a sandstone sculpture by Peter Kamm that seems like a surreal, fossilised element, objets trouvés for which Benedikt Terwiel has found new locations [29], and the container which Sofia Hultén presents to us as an abstract volume. We approach a tree that has been put in our way by Mandla Reuter and are given a view over the park from a bench made of recycled wood - a seat sculpture by Jochen Weber. And a seemingly crystalline object on a table by Roland Gätzschmann has the air of a still life.

Finally we encounter new works by Martin Boyce, Thomas Kiesewetter, Hubert Kiecol and Thomas Schütte that can be termed autonomous, but which in their own ways theme their locations in the park.
KölnSkulptur #6 sets out to redefine a handed-down theme and with that to reinvent itself. Above all, its objective is to invite the visitors to linger while looking, so as to grasp the sightlines from the reference point of their own free-ranging associations as an individual experience in seeing. Sculpture is the art of physical experience within the space of space.