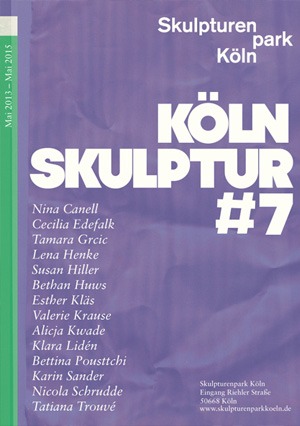 The restaging of Cologne sculpture park, visible from May 2013 to spring 2015, has to be looked at bearing in mind the previous KölnSkulptur #6 because substantial changes had come along with it. The park's area has been enlarged since and additional spaces have been created, offering new vistas. Since 2011, the Garden Gallery, an open pavilion, dominates the park and this work by the Japanese architect Sou Fujimoto gave a new landmark to the park. Furthermore, Florian Slotawa's work Kölner Reihe started off an unusual and surprising formal dialogue between focal points of the sculpture park's collectional history. Slotawa's concept, to only have assembled the seven pieces of the Kölner Reihe temporarily, forced KölnSkulptur #7 to place the works in new positions where they could resume their autonomous presence.

Bearing this in mind, the new positionings in the exhibition KölnSkulptur #7 follow the tradition of all previous exhibitions and together with the current contributions set the agenda for a contemporary tendency in sculpture which is characterised by sculpture as an idea with reference to an existent situation. The Cologne sculpture park can be read as a place that with its versatility of different perspectives offers visitors time, leisure to linger and ponder the different materials. Consequently, Karin Sander has chosen seven places which invite visitors to take a rest, sitting down on circular mats of synthetic turf. The manufacturer calls this product, selected by Sander from a range of almost one hundred, Paradise 231, which in turn broadens the interpretational horizon within the park's context. Bethan Huws has had a multi-part ladder put up, which, pointing skyward, steers associations towards the scaling of dreams with its purpose-free undirectedness. The disused power pole by Nina Canell seems like the ruins of a post-modern age, a reminiscent of the utopia of those years in which no one had to worry about energy. Against the background of the city skyline, the pole becomes a cautionary object that sends the message at the same time not to be networked any longer in the park. Close by, Susan Hiller has had her acoustic work installed, which, originally conceived for a Landesgartenschau, transforms Mendel's inheritance laws into a sound installation. It seems as if Édouard Manet's famous 1863 painting ''The Luncheon on the Grass'' has become a point of reference not only for Karin Sander, but also for Alicja Kwade, denoting an idyll which has become a common good: the raw, untreated boulders of different kinds of stone have been placed like a living room suite in the open, seemingly offering the opportunity to carve sitting, lying or standing figures, sculptures-to-be, thus visualising the ancient Pygmalion topic as a process of the internal imagination.

Klara Lidén achieves such a transformation in a most astonishing way: in the very place where the steel container sculpture by Sofia Hultén used to sit, now there appears a hedge, cut in the shape of a container. On the way there, the ground work of Esther Kläs shows a piece made of coloured concrete whose shape leaves it to the viewer whether to see a body impression or a shape created in the form of a vessel – again, creating the ultimately indefinable expression is the aim of the form. With her tripartite work, Lena Henke refers to graffiti-photographs by Brassaï. The work Elisabeth by Bettina Pousttchi alludes to a street name in Berlin, where the artist has found these elements and arranged them to a new composition as such. One of the previous landmarks of Cologne sculpture park had to be removed into storage for safety reasons. The spectacular space is now used by Cecilia Edefalk for a bronze which in a camouflage of a birch branch likens this place to a quasi-archaeological site. A second bronze near the passage leading to one of the three bunkers dominating Cologne sculpture park plays with this theme of the mise-en-scène of places. Also the casting moulds of Tatiana Trouvé's sculpture play with the surrealist tradition. Her voluminous casts of paper bags in connection with bronze-cast shoes suggest the absence of figures commanding this space. The ceramic forms of Nicola Schrudde are searching for a similar archaicism with organic shapes protected by a miniaturised glass house. Valerie Krause places a horizontal picture in a window of Sou Fujimoto's garden pavilion, thus establishing a relation between a close horizon and the grand panorama of the river Rhine. An unusual contribution by Tamara Grcic invites new guests to stay in the park. She placed nesting boxes for parakeets high up in the tree tops of two plane trees to offer the offspring of Cologne Zoo a new home. The birds' green plumage lends a vivid colouring to the park which is in motion continuously and gives visitors the opportunity of experiencing situational moments of lightness while viewing the new works.