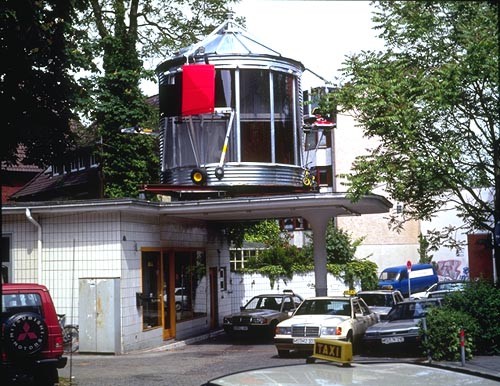 Münster: 1997
In summer 1997 the "Sculpture. Projects" will again take place in Münster. Münster has twice before hosted this international exhibition, in 1977 and 1987. Since then, Münster prevails as the most prominent locale for art in public spaces: more than thirty works remain in the city as an abiding part of daily life. In 1997 both the Westfälisches Landesmuseum für Kunst und Kulturgeschichte (Westphalian Landesmuseum for Art and Cultural History) and the City of Münster invite artists from all over the world for one hundred days - from June 22 to September 28 - toinvestigate on location questions of the meaning and function of art.

The Participating Artists
As in the previous exhibitions, the intensive work of the artists in and with the city is the nucleus of the development of individual projects. The conceptual guidelines to the exhibition will evolve in the course of cooperation between the curators and the artists. That means that the exhibition will not stipulate themes but will develop focal points in conjunction with the artists.
Up to now, more than fifty participating artists have been in Münster, planning projects. On the basis of the project outlines, the organizational and financial frameworks, as well as their feasibility, were examined. Already at this time, many projects are in the process of realization and it is expected that 1997's contributions will freshly examine, on the one hand, sculpture and its role in public space, and on the other hand, the traditional function of the art museum.

The City and the Museum: Public Space
The "Sculpture. Projects in Münster 1997" live up to the tradition of the previous exhibitions of 1977 and 1987: the projects will present sculpture and art in public space, tuned in to the most contemporary discussions. While during the 1977 exhibtion, a retrospective of the history of sculpture in the 20th-century was necessary in order to develop a prospect of the newest tendencies, the sculpture projects of 1987 constituted an internationally-debated, ambitious attempt to give art a place in the cityscape, as well as in the history and sociology of public life.
On the basis of these standards and of the experience of twenty years' of art in public space, the changed conditions and possibilities of an aesthetic intervention outside of the museum will be again examined in Münster in 1997. In this way the "Sculpture. Projects in Münster 1997" is the attempt to simultaneously assess the past and to see into the future.
As in 1987, most of the work will be realized in the city's outdoor spaces, concentratedly in the city center. The frame is shaped by the Promenade, once the city's old fortifications, now a circa 4.3 km-long "green belt" around the inner city. Over and above that, projects are also planned for the immediately adjacent, spacious grounds of the castle gardens, as well as those of the Aasee, located southwest of the city center.
Aside from the public spaces, the entire old building (Altbau) of the Landesmuseum will be used for the 1997 exhibition "Sculpture. Projects in Münster 1997." The artists are invited to realize a second piece for the area, that will stand in a dialectic relationship to the outside work, as a beginning or end point, supplement, or commentary.
The concept of center (in the Altbau) and periphery (along the Promenade) - of internal and external, of private and public - corresponds to the "historically grown" city structure that dates from the Middle Ages: in the center of Münster lies the cathedral square (Domplatz) and the Prinzipalmarkt, containing respectively, the cathedral and the city hall. The Promenade, in its earlier incarnation as the city fortifications, surrounded the city limits and marked the transition between the city and the country. In the 18th-century the city expanded to the west through the construction of a baroque residential castle.
The exhibition's concentration on the inner city as far as the Promenade ring results in a better visibility and immediacy of the artistic contributions, while at the same time encouraging discussions over the more or less obvious gaps in the development of the nucleus of the city.
All of this is an attempt to create an artistic answer to the "death" or "desertion" of the inner cities.
One aim of the "Projects in Münster 1997" is to freshly define the museum as public space. Open daily until midnight, the exhibition will present the past and future of the Münster projects and provide a context for the discussion of the role of art in public space.
Moreover, a stage planned by Heimo Zobernig for the Altbau of the Landesmuseum will be used as the location for a multiplicity of activites: musical events, dance, theater, literary readings, a series of academic lectures, and talks with artists and curators will occur here.
The exhibition's service center will be also located in the Altbau: here, one can meet, obtain current information, and rent bicycles. With the help of our visitor services, you can prepare for - or evaluate afterwards - your walking or riding tour of the installations. The bookshop Buchhandlung Walther König invites you to browse, and in the exhibition's reference library you will be able to pursue your individual interests in the artistic and/or thematic subject matter of the "Sculpture.Projects in Münster 1997."
The Redaktionsbüro Dank/artthing.de presents the exhibition, its 20-year tradition in Münster, the participating artists, and their contributions to the city in an Internet-Café virtual-room discussion forum.
www.skulptur-projekte.de