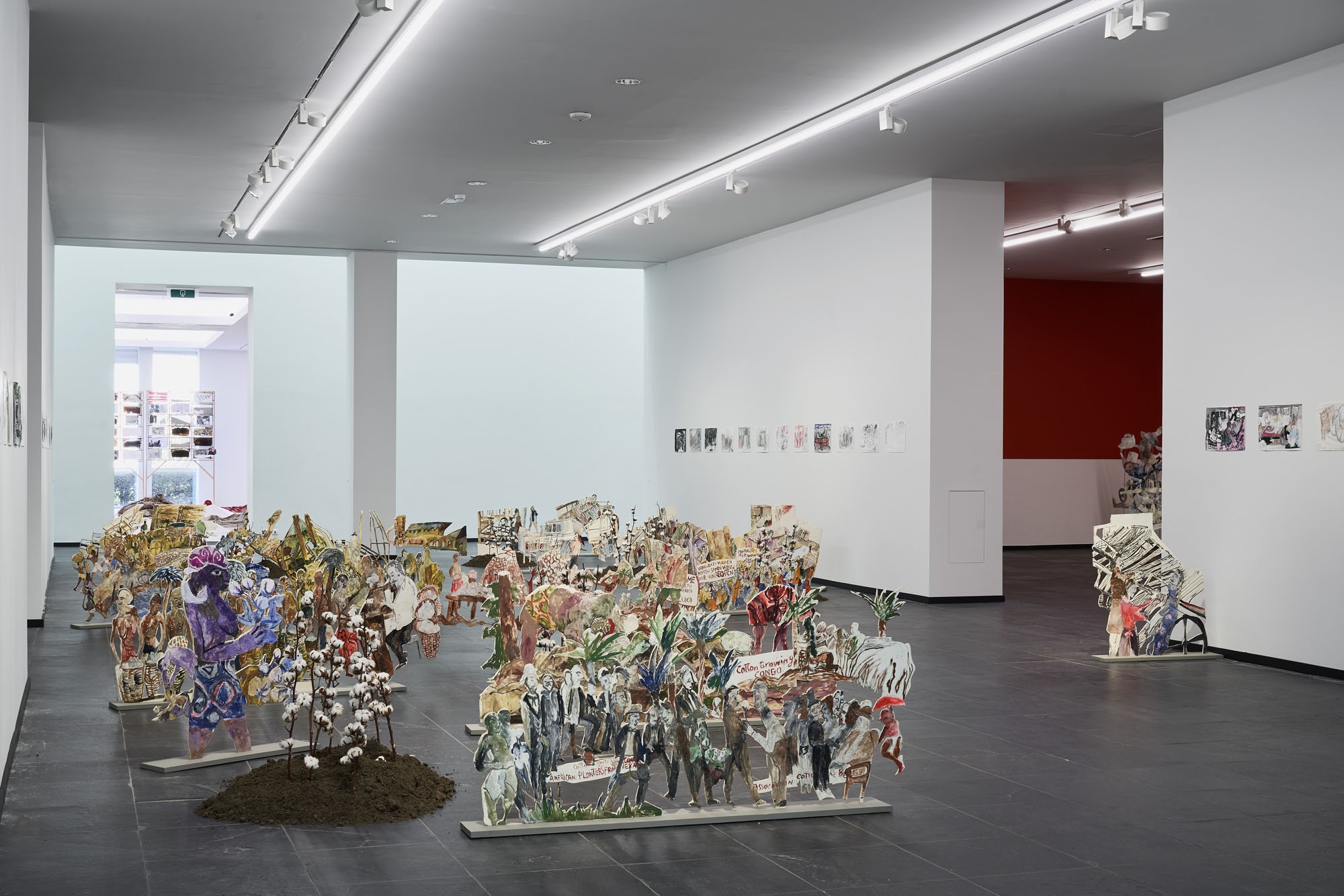 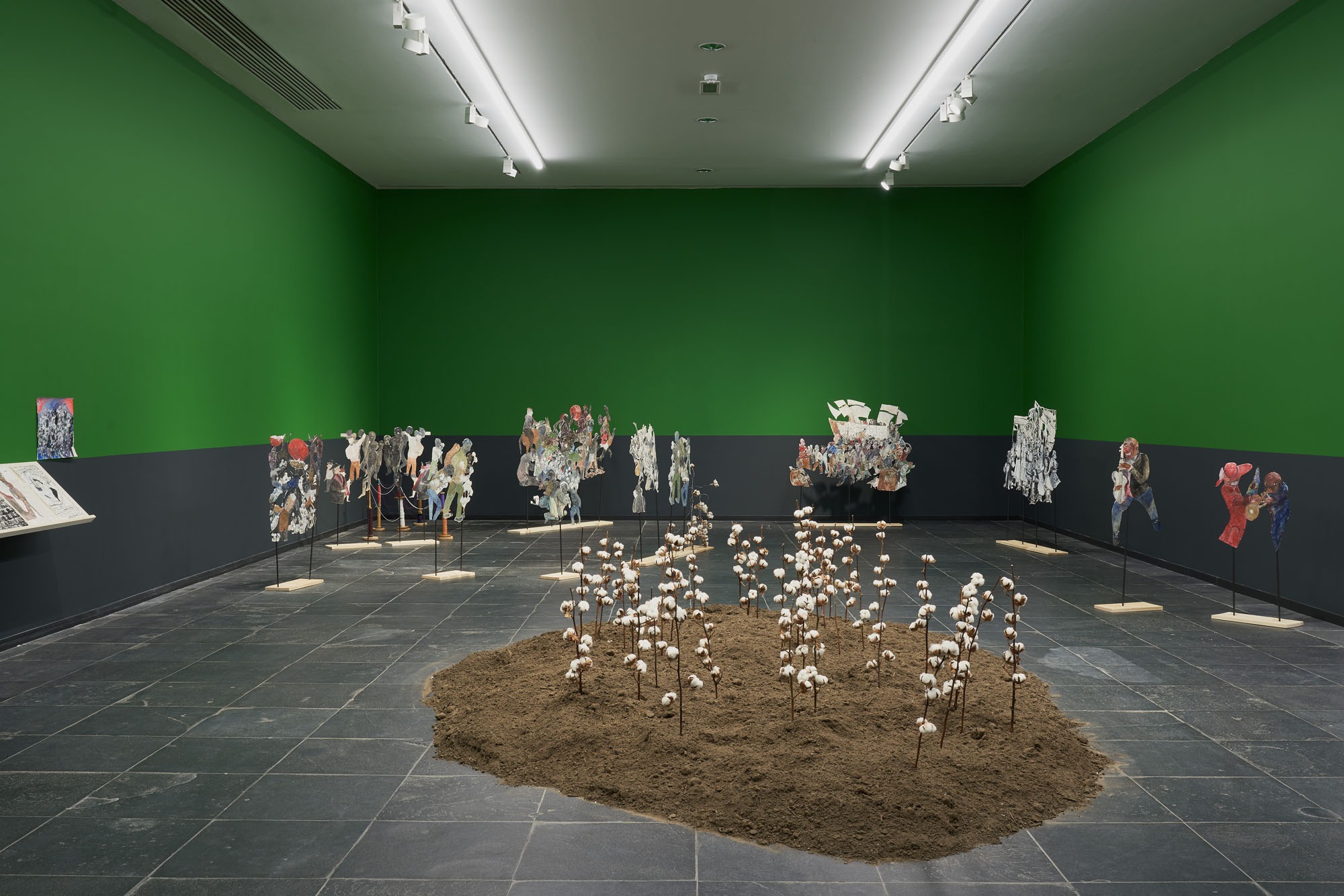 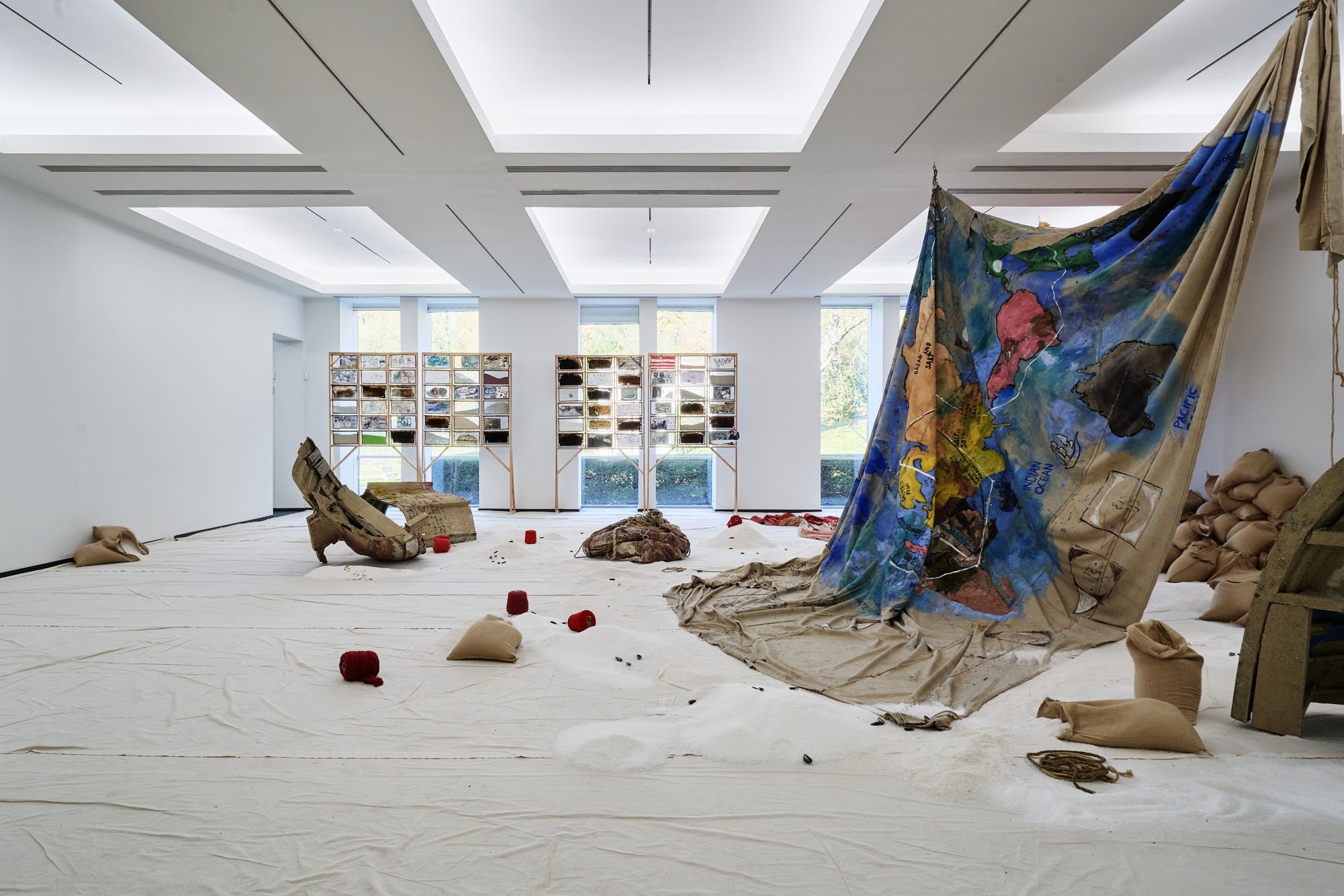 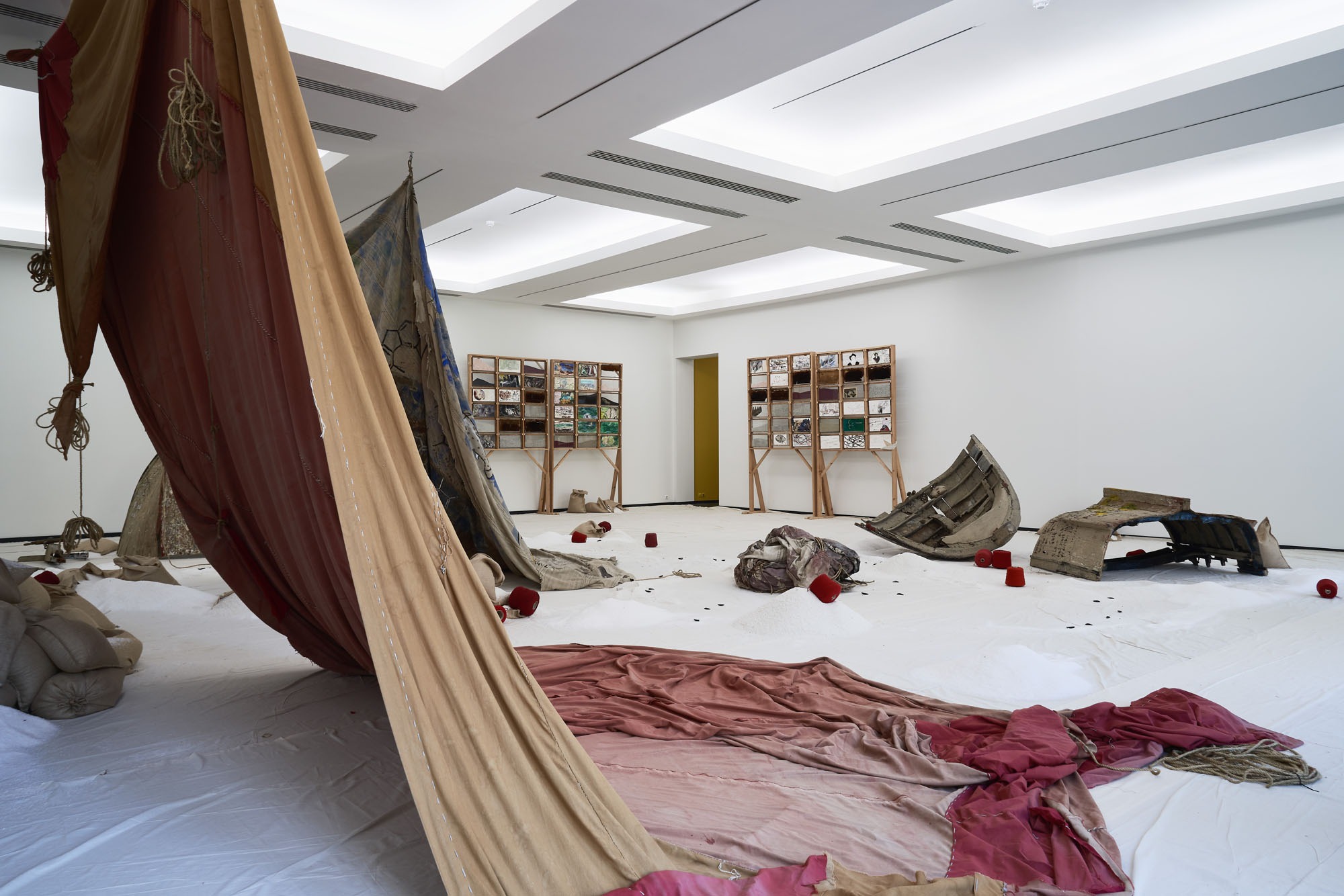 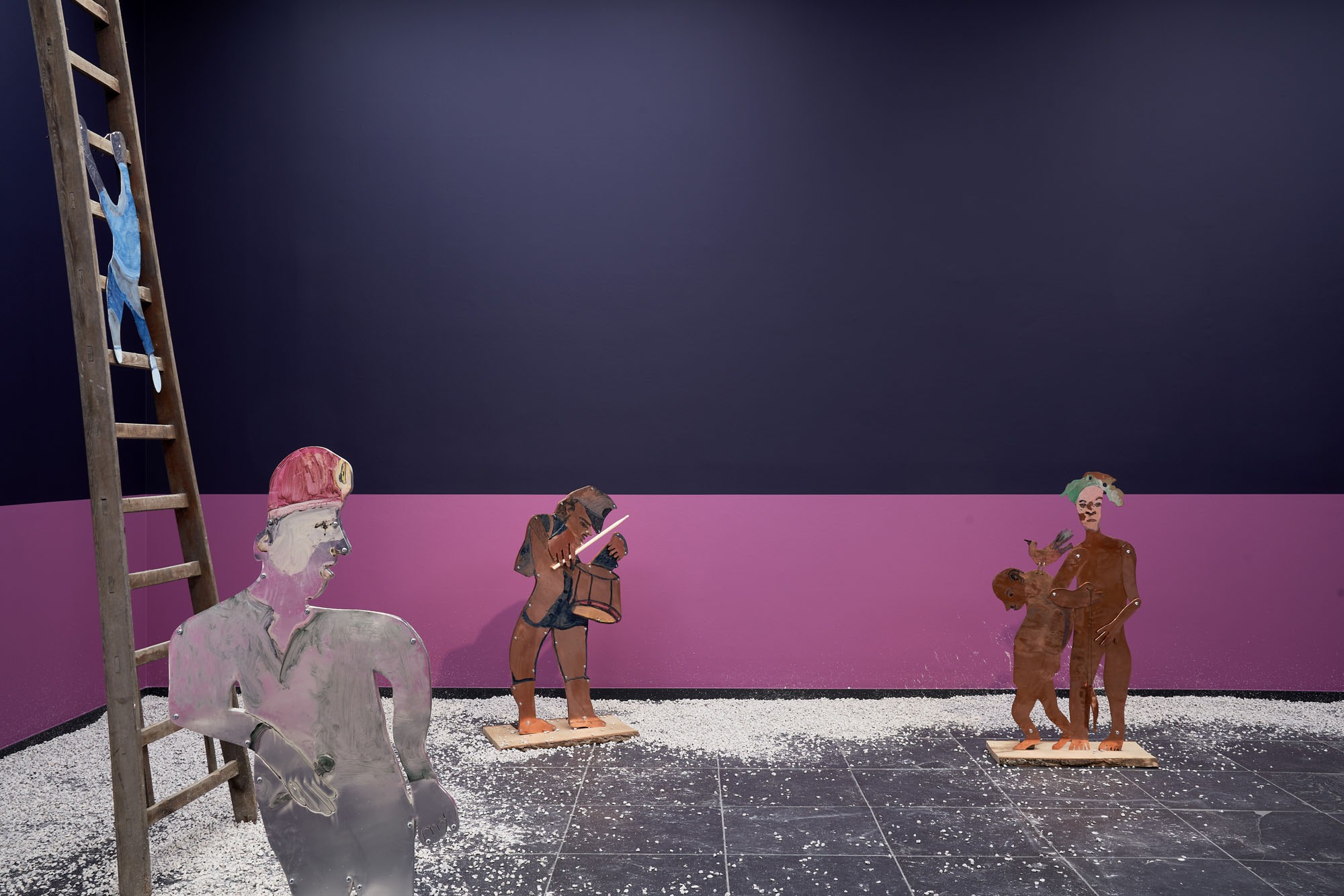 Anna Boghiguian, A Tin Drum that has Forgotten its own Rhythm, 2018-19. Installation view at S.M.A.K. 2020, Image: Dirk Pauwels. Courtesy of the artist 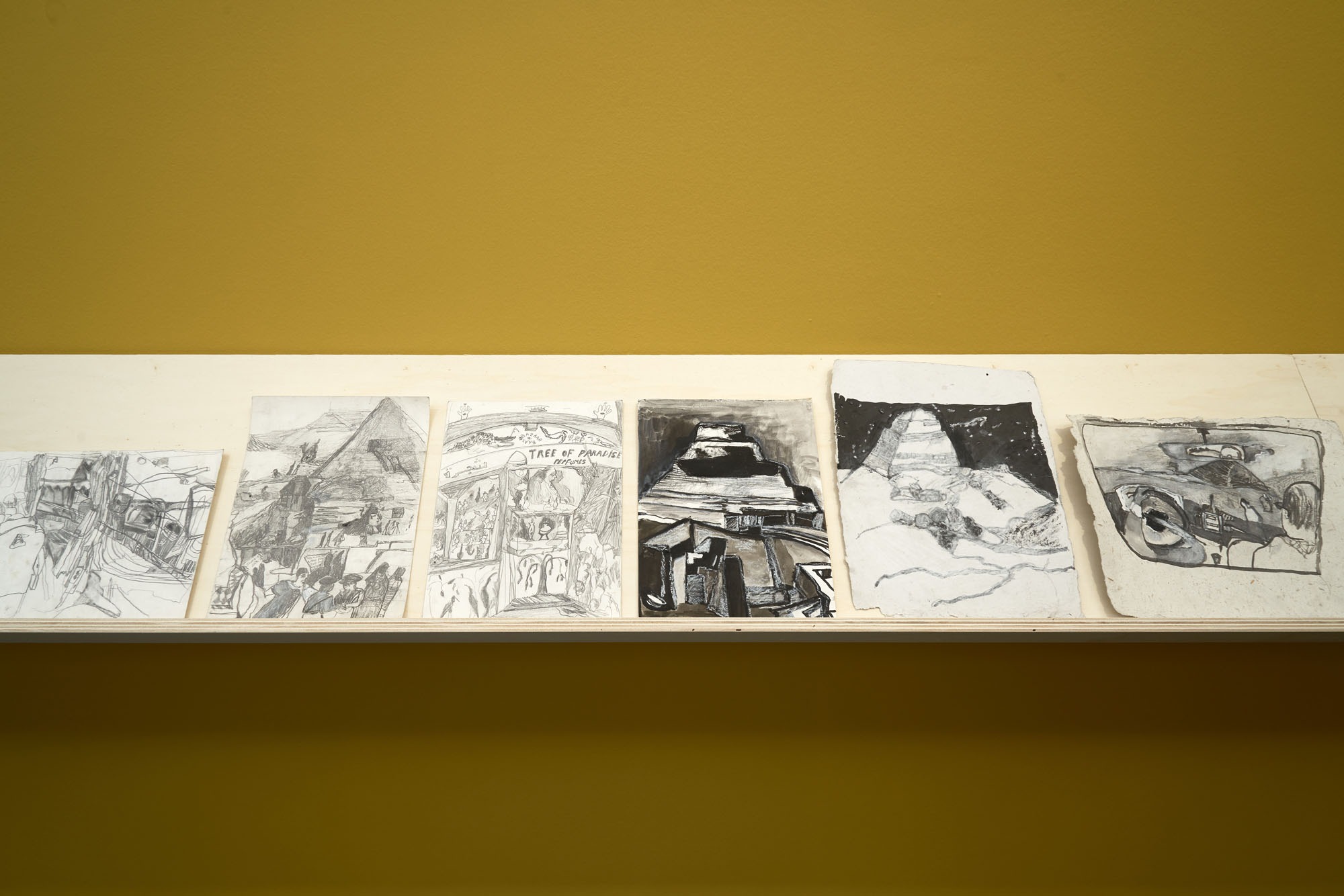 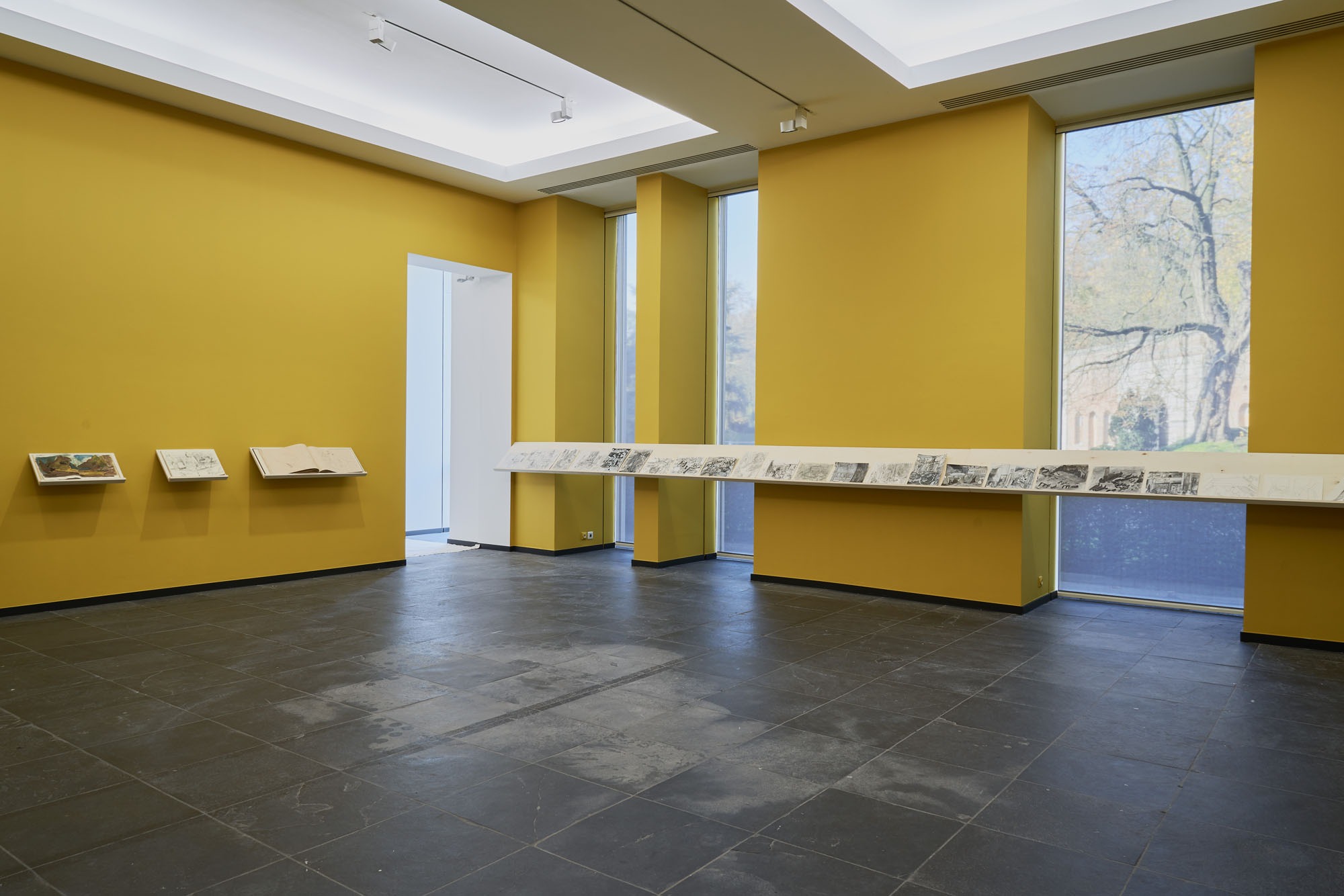 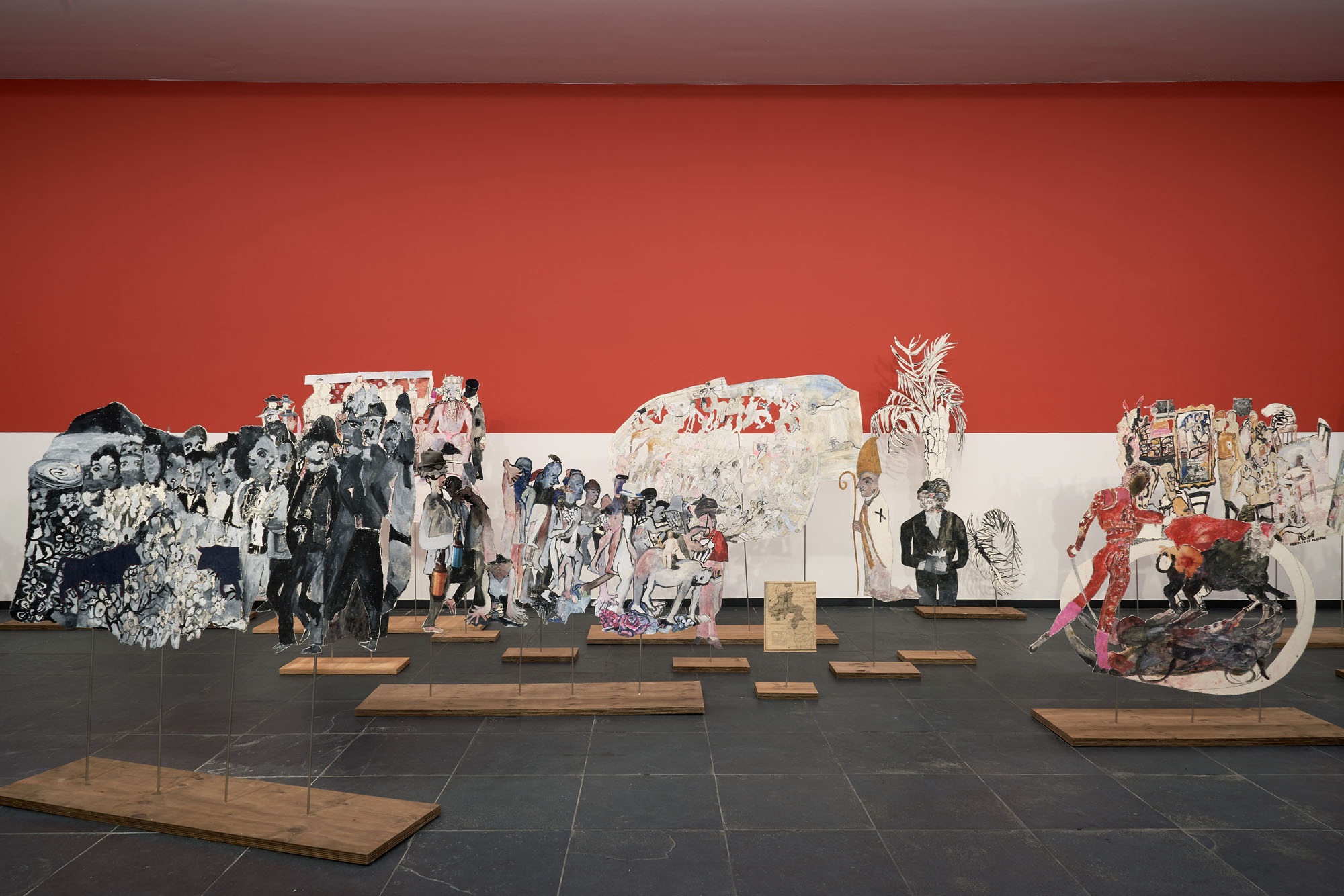 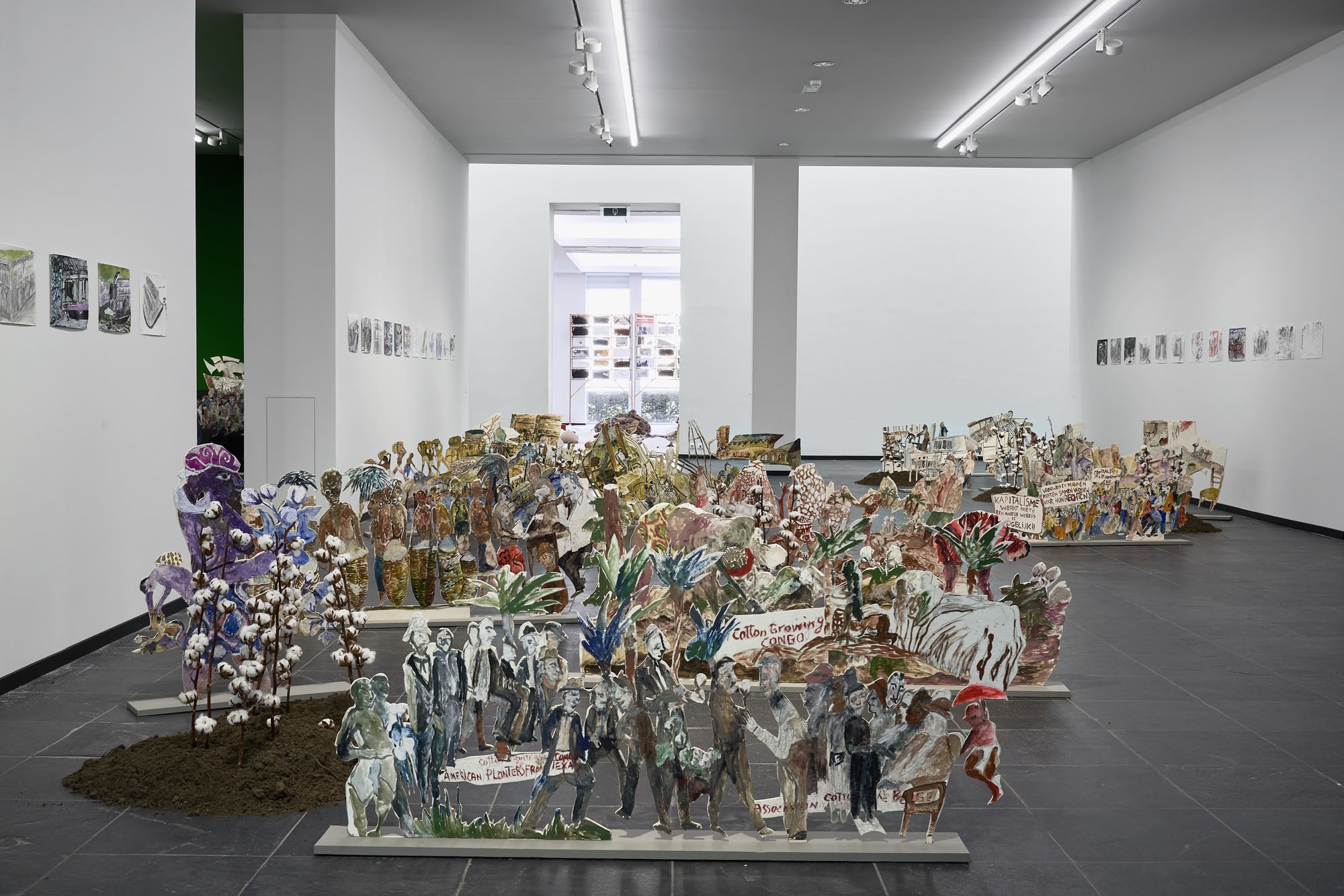 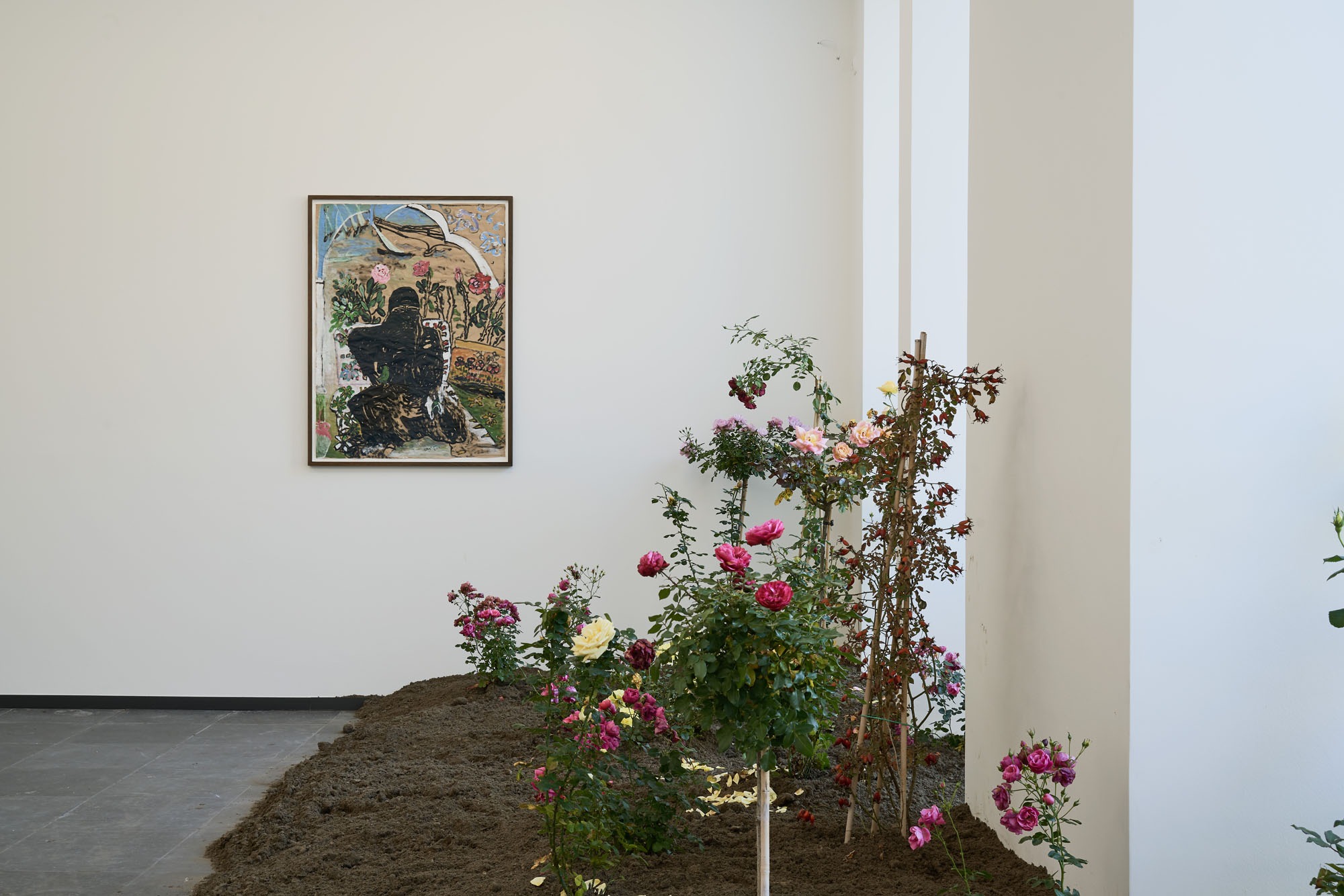 Anna Boghiguian. Installation view at S.M.A.K. 2020, Image: Dirk Pauwels. no title, 2005 (in the back), Djurhuus Collection Copenhagen no title, 2010 (6x), Djurhuus Collection Copenhagen
Anna Boghiguian, an Armenian born in Cairo in 1946, has been making art since the beginning of the 70s. She has developed a practice that corresponds with the tradition of the travelling artist, one that has already taken her to the farthest corners of the planet. Being on the move is a source of inspiration and strengthens her commitment. It makes her alert to the changeability of the world and the specific character of different conditions. As an extremely well-read and free-spirited thinker, she links meaning to the passage and connection of things. With the utmost fascination, she investigates how flows of ideas, goods, people and capital are shaped and can move, but also how this leads to inequalities.

Anna Boghiguian crystallises her experiences, reading of literature and news reports into drawings, collages, books, cut-out figures and complex installations. She paints in encaustic, an ancient technique using pigment and beeswax, which gives light and transparency. Her works are distinctly visual and expressive, yet can also be read as stories. Boghiguian uses them to address global issues, which she interprets in a personal way and links back to people’s experiences, especially those who are victims of oppression.

In her exhibition for S.M.A.K., Anna Boghiguian traces the history of the global cotton trade through a new installation and existing works. Cotton was already cultivated in antiquity and became one of the earliest mass consumer goods. Ghent has a special relationship with this raw material. From the 18th century onwards, the city imported cotton from the East Indies and later also from the United States. With the mechanisation of its textile production in the 19th century, it spearheaded the industrial revolution in mainland Europe. Until recently, cotton was spun, woven and printed in Ghent and traded all over the world. Cotton made the city and its textile magnates rich, but it also led to the unfair treatment of textile workers, the exploitation of land and forced labour on the cotton plantations in Congo.

Anna Boghiguian (b. 1946, Cairo) grew up in Cairo and studied economics and political science at the local American university. She moved to Montreal to study art and music. Boghiguian’s work first came to international attention in 2012 at dOCUMENTA 13 in Kassel. Subsequently invited to exhibit at numerous international museums and art institutes, she has shown work at the biennials in Sharjah (2011), Istanbul (2015), Venice (2015), Santa Fe (2016), Sydney (2019) and at Manifesta 13 in Marseille (2020). Over the past five years, Anna Boghiguian has created solo exhibitions for Carré d’Art, Nîmes (2016), Castello di Rivoli, Turin (2017), New Museum, New York (2017), Museum der Moderne, Salzburg (2018) and Tate St. Ives (2019). Her work is included in the collections of, among others, Castello di Rivoli, Turin; Centre Pompidou, Paris; Tate Modern, London; and the Museum of Modern Art and the Metropolitan Museum, both in New York.
www.smak.be