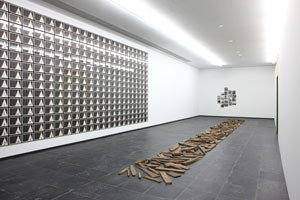 Starting in September, the S.M.A.K. is presenting an exhibition entitled ‘Collection Study III: Art in Europe after 1968’. This study project, launched in 2012, has resulted in a presentation about the exhibition ‘Art in Europe after 1968’, which Jan Hoet mounted in 1980. Works from the original exhibition by such artists as Hanne Darboven, Jannis Kounellis, Luciano Fabro and Art & Language are combined with pieces from the archives and photographic documents in a setting designed by the Brussels artist Richard Venlet.

The S.M.A.K. is dedicating this project to Jan Hoet, the founding director of Ghent’s Museum of Contemporary Art, following his death in early 2014.

‘Art in Europe after 1968’, an exhibition mounted by Jan Hoet in the Museum of Contemporary Art and St Peter’s Abbey in Ghent in the summer of 1980, had an international appeal. The artists participating were selected by an international panel which, apart from Jan Hoet himself, also included such people as Johannes Cladders, Piet van Daalen and Karel Geirlandt. This was the first time that European art was viewed in the light of the American Minimal Art that was predominant at the time. It was also in this project, with works of art by Barry Flanagan and Daniel Buren, that Jan Hoet initiated the Ghent tradition of contemporary art in public space, which has been continued from ‘Chambres d’amis’ (1986) through ‘Over the Edges’ (2002) and ‘TRACK’ (2012) to present activities at the S.M.A.K.

‘Art in Europe after 1968’ not only made the museum much more widely known, but also had a major effect on the expansion and significance of the collection. For the first time, Jan Hoet had the resources to give substantial shape to the collection by acquiring such prime works as Panamarenko’s The Aeromodeller, Joseph Beuys’ Wirtschaftswerte and some major pieces from the Italian Arte Povera. The importance of these key works provided the stimulus for an in-depth study of the significance to the S.M.A.K. collection, and by extension to Belgian art history, of the exhibition ‘Art in Europe after 1968’.

The present exhibition takes this study as its starting point and charts the earlier exhibition, its origins, and its importance to the collection, all on the basis of a number of major pieces from the collection and a selection of archive and documentation material. With the aid of numerous documents, letters, photos, reports, excerpts from audiovisual material, draft sketches, plans and so on, from archives both at the museum and elsewhere, it was possible to make a reconstruction of this crucial period in the history of the museum.

‘Collection Study I’ was the ‘Inside Installations’ project (2010), and ‘Collection Study II’ took the form of an exhibition entitled ‘Museum for a Small City’ (2013), whose curator was the artist Richard Venlet.

Philippe Van Cauteren on Richard Venlet’s contribution to the exhibition

‘Richard Venlet (1964, Hamilton, Australia) examines how and in what context art is presented and how this plays a part in determining the viewer’s experience. He questions the museum space and the architecture of viewing. His analysis does not result in the criticism of the institutions we were familiar with in the 1960s and 1970s, but is based on a fascination and respect for art and artworks. In addition to artworks, he regularly incorporates items from archives, documents and exhibition material into his contextual installations; he only rarely produces an autonomous work of art.
In 2006 Venlet created the spatial presentation of the ‘Recollecting Landscapes’ research project for the S.M.A.K. and, more recently, in 2013-14, for his exhibition ‘Museum for a Small City’, he made use of a small selection of works from the museum’s collection and archives. His collaboration with the S.M.A.K. for the design of ‘Collection Study III: Art in Europe after 1968’ is a continuation of these projects. On this occasion, Venlet’s interest in museum collections and their history is combined with the question of how ‘Art in Europe after 1968’ (1980), one of the more important exhibitions in the history of the S.M.A.K., can be reactivated and presented to the public in an interesting and captivating way.
For the visual element of this exhibition, Venlet used the graphic symbol of the original exhibition, which was based on a triangle, as a ready-made and template. Rather than reconstructing the design of ‘Art in Europe after 1968’, he sought a way to visualise the intention, and the documentary and artistic nature of this new presentation. Richard Venlet’s intervention is visible and tangible, but at the same time it relates discretely and respectfully to the works of art shown.’

The exhibition will be accompanied by a publication on the study project and a programme of public activities in which Koen Brams and Dirk Pültau, both closely acquainted with the museum and the collection, will explore various elements by means of interviews, talks and debates. Another aspect of the programme of public activities will be linked to the exhibition ‘The Sea’ that will be held in Ostend (through Mu.ZEE) this autumn as a tribute to Jan Hoet. Additional information on the public activities will be available later.
www.smak.be