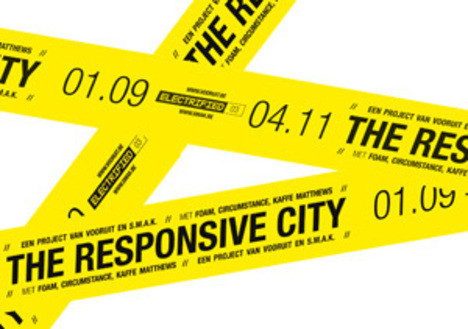 Electrified is a S.M.A.K. and the Vooruit Arts Centre are joining forces. Electrified III is a festival that focuses on artists whose field of action is the ‘public space’. This third edition, called ‘The Responsive City’, is also part of TRACK and consists of 3 projects that uncover hidden spots in the city. Get a chance to play a part in an invisible movie set against the backdrop of the city, enjoy an urban opera while riding an “audio bike”, or discover a secret green universe, a potential model for tomorrow’s society.

Circumstance | Tomorrow the ground forgets you were here
Two streets and a square in Ghent (Walpoortstraat, Lammerstraat and Zuid) become the setting of a true to life film. Circumstance creates a unique experience with words, music and ambient sound while you walk through the city. You can hear the thoughts of the coffee shop owner, the chocolatier, the lady from the tobacco store, the librarian, and so on. They are all extras in a film that unfurls before you thanks to your headphones. If you liked Duncan Speakman’s subtle mobs at Gent-Sint-Pieters station and on Graslei, you will absolutely love this new audio drama by Speakman’s Circumstance company.

Kaffe Matthews – The swamp that was, a bicycle opera
A bicycle opera in Ghent! British sound artist Kaffe Matthews records urban sounds such as music, singing and street sounds. As she combines these with elements from the past, she creates an unseen urban opera. A mobile composition, written for cyclists. You can rent an “audio bike” to explore the streets of Ghent. As you ride past certain spots, sound recordings are played on the speakers of your bike, uncovering the soundtrack of the city piece by piece.

foam – Borrowed Scenery
Brussels collective foam attempts to model new forms of society on the world of plants. Plants are sustainable, recycle their own waste, produce their own energy, feed the soil instead of polluting it and clean the air. During Electrified, foam will build a new world called

Borrowed Scenery in the Snoepwinkel – the small building right next to Vooruit’s box office – and visitors can explore this ethno-botanical laboratory at liberty. Borrowed Scenery is a test case for new forms of society, with the city as its laboratory and the internet as an exchange platform.
www.smak.be