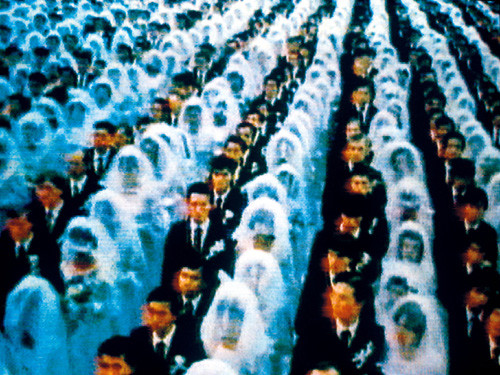 S.M.A.K. is presenting the first Belgian retrospective by the filmmaker and artist Johan Grimonprez (1962, Roeselare). In the course of several sections, Grimonprez brings his works face to face with contemporary and historical counterparts, some taken from the Internet. He enters into dialogue with the artists Roy Villevoye and Jan Dietvorst and also with other makers of film and television including Adam Curtis, Brian Springer, the Yes Men, Dr. John Mack and Adbusters. Using documentary material, found footage, items from historical archives, his own home videos, news pictures, advertising, video clips and excerpts from Hollywood films, Grimonprez tries in his own way to make sense of the wreckage wrought by History.

Grimonprez’ work moves elegantly between art and cinema, documentary and fiction, theory and practice. In a world abundant with images produced (and reproduced) on a massive scale, Grimonprez proposes new narrative structures as a way to continue to tell personal stories. Based on an archaeology of contemporary media his work reveals – and disrupts – the way the moving image partakes in the construction of our personal and political histories, our fears and desires as well as how we define ourselves in a rapidly changing world.

In this exhibition, several ensembles are assembled around key works from Grimonprez’ oeuvre, including 'Kobarweng Or where is Your Helicopter' (1992), 'dial H-I-S-T-O-R-Y' (1997) and 'Double Take' (2009). It unfolds like an enormous multimedia ‘vlog’ (video blog) / iPad installation through which the visitor finds his way by ‘zapping’ through a boundless web of internal and external links. In addition to the video lounge, with its 'WeTube-o-theque', the exhibition also includes several reading corners where the visitor can leaf through the recent publication 'It's a Poor Sort Of Memory That Only Works Backwards' (2011), containing essays, interviews and film scripts. Other books include the 'Inflight Magazine' (2000), produced for the exhibition at S.M.A.K. in 2000.

Different versions of this exhibition have previously been shown at the Pinakothek der Moderne in Munich in 2007 and at The Fruitmarket Gallery in Edinburgh and the Blaffer Museum in Houston in 2010.
www.smak.be