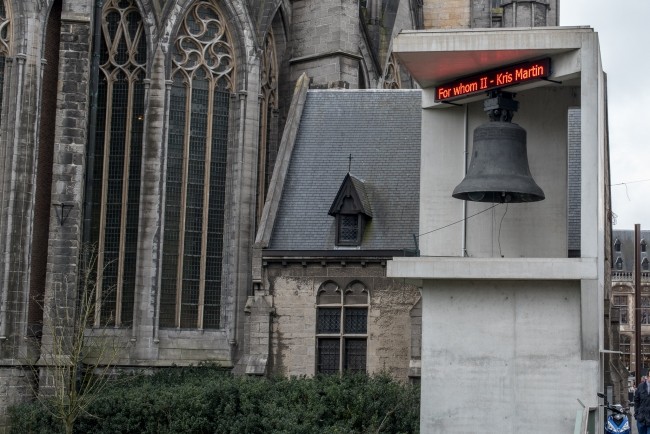 The ‘Grote Triomfante’ bell, which was cast from the broken pieces of the earlier, historical bell ‘Klokke Roeland’ in 1660, will ring once, softly, for every inhabitant of Ghent. In this poetic way, Kris Martin (1972, Kortrijk, will offer every inhabitant a personalised work of art. Each inhabitant can choose whether their name appears at the same time as the bell strikes. Those who prefer to remain unnamed will hear an anonymous chime. It will take about three months for the bell to chime once for all 257,983 inhabitants, and after that the artwork will fall silent. Lastly, those Ghent people who are mentioned may pick up a signed edition of their personalised chime at the museum if they so wish.

In this project, Kris Martin is making a gesture of solidarity between all the cultures, ages and social levels in Ghent. He makes us reflect on what it currently means to live together in a city.

The artist took the title, For Whom II, from the poem For Whom the Bell Tolls by the Anglican writer-priest John Donne, who in 1624 preached a similar universal humanism:

"No man is an island, entire of itself; every man is a piece of the continent, a part of the main. If a clod be washed away by the sea, Europe is the less, as well as if a promontory were, as well as if a manor of thy friend's or of thine own were: any man's death diminishes me, because I am involved in mankind, and therefore never send to know for whom the bell tolls; it tolls for thee."

These words provided the basis for one of Martin’s earlier sculptures: For Whom (2012), a moving bell without a clapper that is on permanent display in the sculpture garden at the Walker Art Center in Minneapolis (MN, US). In both these projects in public space, Martin links, in a highly individual way, the history of religious art to strategies employed in conceptual art. Their contemplative nature also demonstrates his fascination with the personal experience of time, which is founded on memory, transience and eternity.

Kris Martin | For Whom II is an extra muros project by S.M.A.K. in association with Ghent City Council.
The work can be visited at the bell-tower on Emile Braunplein in Ghent every day from 10 am to 4 pm, 25 January to 6 May 2018.
Would you, as an inhabitant of Ghent, like to see your name appear together with a chime of the bell? If so, send a mail with your first name and family name to mijnnaam@smak.be.
Once the artwork has been completed, you will receive a mail from us informing you that you can come and pick up your signed edition.
www.smak.be