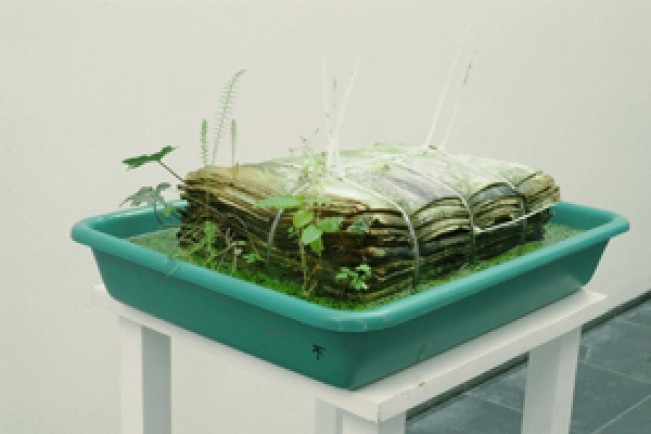 The Lois Weinberger Gift exhibition is the second in a short series of presentations focusing on recent gifts to the S.M.A.K., following that of major works by the French artist François Morellet, which the museum inherited from the Brussels collector Henri Chotteau in 2012. This time it concerns a gift of 16 works by the Austrian artist Lois Weinberger (Stams, 1947). In 2005, S.M.A.K. held Belgium’s first properly underpinned exhibition by this artist. In this context the museum had already purchased 19 of Weinberger’s works, which means that the S.M.A.K. now has the most significant and representative ensemble of his work. Weinberger made his debut in the 1970s. The basis of his oeuvre lies in a political and poetic view of the notion of ‘nature’. In contrast with the rather romantic depiction of nature as the primitive counterpart to culture – which Weinberger considers to be a misconception – he demonstrates that the notions of ‘natural’ and ‘artificial’ have become indisputably fused. Weinberger creates ‘temporary places’ in which he leaves room for ‘non-intervention’ by nature. His works may take the form of guerrilla gardens in the open air or small modular indoor gardens, but may also be drawings, sculptures, photos, texts, slides, video installations or site-specific projects. Weinberger usually limits himself to minimal, artificial interventions that bring such opposites as the nomadic and the urban, the orderly and the chaotic into harmony with each other in his poetic visual world.
www.smak.be