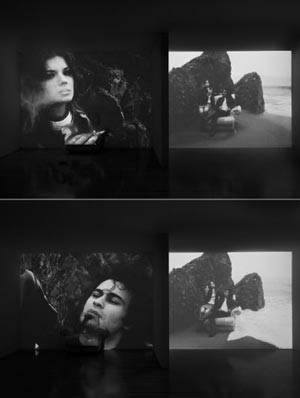 “And this flow of light which could
produce a place, this flow of air which
could produce a sound, all of it remaining
unpredictable, this incidence
could have a moment of hesitation,
in the case that at least two people
are there.”
Maria Nordman (POIEMA Notizen / Notes 1970 -, 1982 )

GEO-AESTHETICS an exhibition of Maria Nordman’s work from a period of several decades and the present, opens from 6/21/2013 until September 22, 2013 outside and inside of SMAK Gent.
“Maria Nordman is an artist having developed a long standing relation with the city of Ghent and its Museum of Contemporary Art. Could we call her an artist who develops since several decades an artistic vision whereby the interaction and intersection between a.o.sculpture, nature, language and time is being re-validated and reconsidered? An artist who seeks to reflect and rediscover the real notion of culture and the city?”
Philippe Van Cauteren (letter from March 18, 2013)

With this title, could this exhibition become a questioning process between oneself, one’s neighbours and one’s personal / interpersonal daily context?
Beginning with meetings with persons in the museum and in the city during the preparation period, there is a specific start of a work just outside the entrance of SMAK at the Citadelpark on 6/21/2013 at ___ p.m. An action connected with music – questions a cohesion between painting, sculpture and architecture as tools of the horizon.
Just inside the museum, a group of standing books GEO – AESTHETICS de tempo real NATURA (s)CULTURA WORKS WITH PEOPLE being shown as sculptures, regularly changing pages open to solar illumination.
Looking from a longer view at this work, sunlight, air, water, earth, the stars, stand at the artist Maria Nordman’s side as full partners in her art. Yet instead of withdrawing into the wilderness of nature, she works with these relations inside the fabric of the city, in open public places and museums.
There she creates sites – in the form of architectural constructions, drawings, performances or musical and language-related interventions – where the visitor becomes both spectator and actor.
“At the moment of inception: when the viewer and the viewed are one.”Maria Nordman (AANTEKENINGEN, Rijksmuseum Kröller-Müller, 1980) Maria Nordman is internationally considered one of the most influential artists coming out of Los Angeles and continuing to work in cities of different cultures, working from the start directly with the voice for a pre-chosen period of twenty years, producing with any visitor a book CATALOGUE RAISONNÉ carried only by personal memory and by speaking.
The city of Los Angeles at the Pacific, Hollywood and the film culture had as much an impact on this work as the American proto-culture of Los Angeles, the Chumash.
Developing an original oeuvre beginning with filmmaking and the relationship between the viewer and the actor, and the site of filming and the site of projection, this work goes from the film theater directly into places of daily life in the city. In this exhibition the S.M.A.K. will show the early Filmroom from 1967 in relation to more recent works.The Filmroom is already body and performance-related including at this period, “nature as actor.”
At this early point, her oeuvre is already being considered a precursor of what since the 90’s is called ‘relational aesthetics.’ In this larger context of art in which there seems to be a growing desire for an actual connection with nature, Nordman has since the beginning opened her work to nature as speaker in her artistic practice. Her constant use of real time and of the physical experience of the moment has never been so relevant as now.
Building on contradictory researches of her work process, she continues to find means of working that are not disconnected from artists as James Lee Byars, Agnes Varda and Tino Sehgal.
Maria Nordman’s interdisciplinary and interpersonal orientation and her focus on initiating works, inter-generational, inter-cultural and inter-species conditions, for decades the basis of her practice, are noted as influencing of many different broader movements.
In the 1960s she was the first to make a room in the city, where “the context becomes the work.”
“Not to extend the museum or decorate the city but to find a time and place with the arriving persons, where meaning could begin.”
In her work process, perception has a different meaning as she names it INTERPERCEPTION, which could be seen to bring different consequences toward the perception of art itself.
She did not since the start produce works that implicate a passive, individual consumption of art , rather since 1967 she opens her works on the streets “giving any arriving person the position of giving a work of art it’s first meaning in the place and time where it is found.”
She has clearly written in her first book DE SCULPTURA Works in the City that “the work exists only in the presence of any person arriving by chance.”Her drawings only appear as the visitor pulls one at a time out of a cabinet into the light of day.
In her work the arriving person could become a co-constructor who gives the work an identity. This work would have as many meanings as there are persons who interact with it.
“I look for a language that also can live on the street that connects the known and the unknown person.”
Maria Nordman (DE THEATRO, Staatsgalerie Stuttgart, 1996)

If Maria Nordman enters with her works into an intense dialogue with the arriving person, and the site of encounter in the city, then does she as well bring into focus “time of nature and time of the self?”
Could her work be transformative in time and place?
One of the artist’s relationships with the city of Ghent goes back to 1976, when she is invited to propose a work for the Museum of Contemporary Art. Instead of proposing a work for the museum’s interior, she asks to take a two-day walk through Ghent. Finding in the city places of living and working, she chooses one site at the exact center of the city, two ground-floor rooms with a door opposite the STADHUIS at Hoogpoort /Belfortstraat. This results in a ten- year study with one room open to the street with mirrors and colored walls, and a second room being a sketch for a guest room. Finally invited by SMAK in a letter for realisation: “we can invite you for your proposed work only now, for 1986 together with fifty other artists who will work in private homes, ‘Chambres d’Amis’.”
Open to any visitor, the sun as actress brings through the first room – images of the city in a filmic process with mirrors. The second room is a potential guest house presented by Nordman in lectures at the time -- as a building potentially charged by the sun, the winds and water energy. She considers this work still possible with Gent as a guesthouse.
Contrary to the intentions of ‘Chambres d’Amis’ this work at Hoogpoort /Belfortstraat (study 1976 – realisation 1986) is open to “any person arriving by chance,” directly on the street level, making anyone the potential creator of meaning.
Time in the work of Nordman in Ghent is a body, as in the year 2000 when she realizes a work using a period of four continuous weeks, open day and night, in the presence of a hostess or host, on the Lievekaai.
For these two buildings, together named UNTITLED (1998-present), also open from time to time for 24 hours, there is as well a connection with the beginning of her work in the Workroom Pico Santa Monica 1968-99, being kept open for visitors, sometimes for 24 hours, or one week. These actions on the street and in museums as the Kunst Museum Luzern, connect as well to the work presently in the Museum of Contemporary Art in Ghent.
Connecting one work in situ with cooperating museums, begins in the year 2000, with LACMA and MOCA showing together TEMPLE & ALAMEDA as a single exhibition and continuing here in Ghent with S.M.A.K. cooperating with the Museum of Fine Arts in showing in its foyer the drawing “A New City Begins with a Bosque.”
During the period of this exhibition, the Museo Nacional Centro de Arte Reina Sofía in Madrid will exhibit a group of drawings named DAR A LUZ 2007 – .
The Museum of Contemporary Art, Gent is also cooperating with the University of Ghent in its botanical garden “The Plantentuin” which extends a site for a new realisation of the double room project.
The citizens of Ghent and visitors as well as students of the University are invited to codevelop definitions of GEO-AESTHETICS / PRESENCING: what are the actual connections of the living presences in the production of esthetical processes?
And citizens of Ghent and its visitors could choose to become actors or volunteers in the placement of several works in the city, in parks and other open places.
www.smak.be