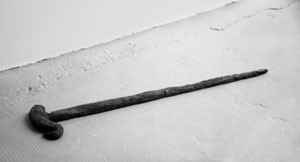 The young Italian artist Paolo Chiasera (1978, Bologna, Italy) is fascinated by historical icons, myths and cultural symbols. He reflects on the various layers of meaning that lie concealed in our contemporary culture. From cinema, literature, philosophy and music to art history and politics. The artist isolates extracts from all these and uses them as pawns in a new narrative that is founded on the "collective memory", like bricks on the ruins of forgotten thoughts.

In concrete terms, Paolo Chiasera’s work is not limited to one particular medium. Painting and drawing, videos, installation, sculpture and performance, they are all available for use in a narrative tangle that is presented to the viewer bit by bit as an ongoing process. In the exhibition Ain’t No Grave Gonna Hold My Body Down, the S.M.A.K. is focusing on a number of artistic processes that have developed in Paolo Chiasera’s oeuvre in the last few years.

In The Trilogy (2006-10), Chiasera enters into dialogue with three well-known artists from the Low Countries: Cornelius Escher (1898-1972), Vincent Van Gogh (1853-90) and Peter Brueghel the Elder (1520-69). The Trilogy is a cluster of works – sculptures, videos and gouache drawings – that he has been working on systematically since 2006. In this complex project, Chiasera focuses primarily on a study of himself as an artist. He undermines the myth of the artist as ubiquitous and supreme by using great masters from art history as pawns in a new game. He calls them by their first names and moves them to a contemporary context. Using rubber masks, Chiasera gets under the skin of these three great masters so as to be able to manipulate and reformulate their stories. He creates his own versions of the existing myths centred on Vincent, Peter and Cornelius, concentrating on their artistic “weaknesses”, their “failures” and their “obsessions”.

In another work, Chiasera examines the theories of the German philosopher Martin Heidegger regarding “time” and “being”, and this resulted in, among other things, the video Condensed Heidegger’s Hut (2009). Using wood and cardboard, he reconstructed the hut that provided the peace in which the philosopher could write some of his major works. The video is like a tribute to the great man, until the moment when der Hütte goes up in flames (or so it is suggested) and the ash that remains is used to create a monochrome painting and a walking stick.

The exhibition at the S.M.A.K. is entitled Ain’t No Grave Gonna Hold My Body Down, a line from a gospel song. Chiasera’s intention with this clear reference to Christ’s resurrection is in the first place to underline a number of recurring elements in his oeuvre. Construction and destruction, the importance of the myth, the hero, but above all the creation of physical remains of meanings imagined lost.
www.smak.be