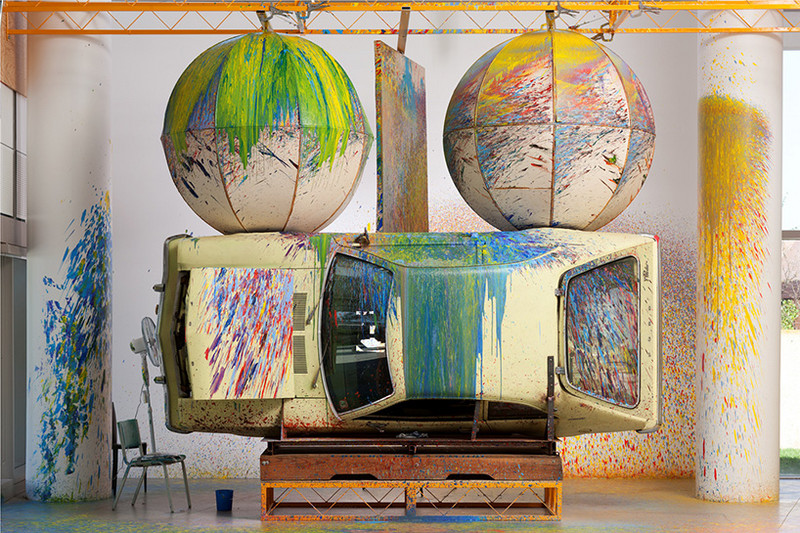 Richard Jackson: Ain’t Painting a Pain’ is the first retrospective devoted to one of the most radical artists of the last 40 years. Jackson (b. 1939, Sacramento, CA) has expanded the possibilities of painting more than any other contemporary figure and his wildly inventive, exuberant, and irreverent take on "action" painting has dramatically extended its performative and spatial dimensions, merged it with sculpture, and repositioned it as an art of everyday experience rather than one of heroic myth.

The exhibition also strongly connects with S.M.A.K.’s museum history, in particular its previous large-scale presentations by major American artists like Paul McCarthy or Dara Birnbaum. In his obsessive way Richard Jackson parodies not only European art history, with its very explicit and colorful “paintings”, his exhibition also challenges in a liberating and grotesque manner the sublime and sensitive brushwork we know from the “painter’s nation” of Belgium.

‘Ain’t Painting a Pain’ is conceived as a series of room-scale installations from 1970 to 2014, accompanied by over 150 of Jackson’s related preparatory drawings, works on paper, and models. The exhibition, curated by Dennis Szakacs, was on view in 2013 in the Orange County Museum of Art (OCMA) in Newport, CA, US, and then traveled to the Museum Villa Stuck in Munich, Germany, with a final stop here in S.M.A.K.

The exhibition is organized by the Orange County Museum of Art and curated by former OCMA director Dennis Szakacs. It is made possible by The Andy Warhol Foundation for the Visual Arts, Jean and Tim Weiss, Rennie Collection, Vancouver and Hauser & Wirth. The catalogue is underwritten by Lenore and Bernard Greenberg. Additional support is provided by David Kordansky Gallery.
www.smak.be